As the airships sailed along they smashed up the city.

The War in the Air, a military science fiction novel by H. G. Wells, written in four months in 1907 and serialised and published in 1908 in The Pall Mall Magazine, is like many of Wells's works notable for its prophetic ideas, images, and concepts - in this case, the use of the aircraft for the purpose of warfare and the coming of World War I. The novel's hero is Bert Smallways, a "forward-thinking young man" and a "kind of bicycle engineer of the let's-'ave-a-look-at-it and enamel-chipping variety.

Slowly, broadly, invincibly, there grew upon Bert’s mind realisation of the immense tragedy of humanity into which his life was flowing; the appalling and universal nature of the epoch that had arrived; the conception of an end to security and order and habit. The whole world was at war and it could not get back to peace, it might never recover peace. (Chapter Ten, The War in the Air)

The War In The Air is often referenced because in it Wells so accurately anticipated lots of details of aerial warfare – dogfights, bombing raids, even what the earth looks like from up in the air – none of which existed or were possible when he wrote the book in 1907 and when the most primitive flying machines had only just been invented.

I think these "science fiction novels" often keep us a lot of interesting information. This topic reminded me of John Jacob Astor's book: A JOURNEY TO OTHER WORLDS A ROMANCE OF THE FUTURE The man gives us details of how life will be in the year 2000, what surprises me the most is how successful he is in everything. For example: "This period, 2000 AD, is by far the most wonderful the world has ever seen. The advancement in scientific knowledge and achievement within the memory of the current generation has been so stupendous that it completely outshines everything. All times of history and all periods of the world have been remarkable for some distinctive or characteristic feature. The year 1789 marked the decline of the power of the courts and the evolution of government by the people. Thus, by the spread of republican ideas and the great advance in science, education has become universal, for both women and men, and this is more than ever a mechanical age. " "Electricity in its various forms does all the work, having replaced animal and manual labor in everything, and man only has to direct. The greatest ingenuity, after finding new uses for this almost omnipotent fluid, has been shown by inducing the forces of nature, and even the sun, to produce it. "

"At the end of the Franco-Prussian War, in 1871, continental Europe entered the condition of an armed camp, which lasted almost half a century. The main cause of this was the mutual dislike and jealousy of France and Germany, each of them. who strove to have a larger and better equipped national defense than the other.There were also many other causes, such as the ambition of the Russian Tsar, supported by the vast but imperfectly developed resources of his country and the practically unlimited supply of men. , a phase of which was the constant ferment on the Balkan peninsula and other Russia's plans for expansion into Asia. "These tremendous sacrifices for weaponry, both on land and in water, had far-reaching results and, as we see it now, they were clouds with silver reflections. The demand for hardened steel projectiles, nickel steel plates, and lightweight and nearly unbreakable machinery, was a great incentive for the improvement of metallurgy, while the need for compact and safely transported munitions greatly stimulated chemical research and led to the discovery of explosives whose powers no obstacle can resist and, incidentally, other more useful things. However, new mechanical and scientific advances were involved, such as flying machines equipped with these high-powered explosives and suffocating bombs containing compressed gas that could be fired from firearms or thrown from the air. The former would have left all cities in the dust, and the latter could almost have wiped out the race. These discoveries providentially averted hostilities, so that the long-awaited "Great War" never came, and rival nations had their penalties for nothing, or rather, for others than themselves. 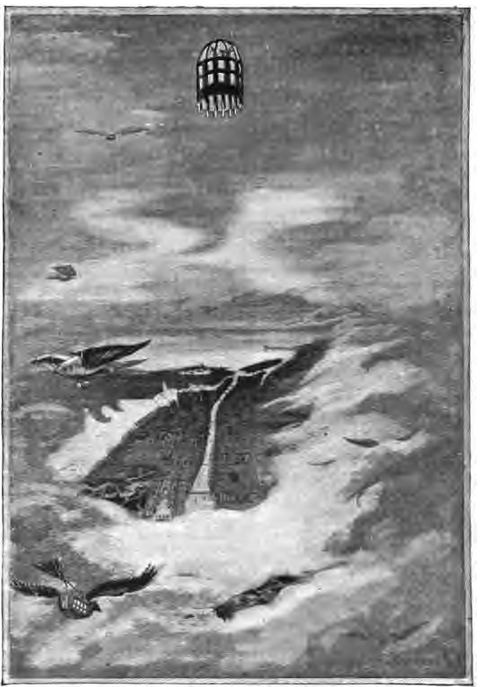 In the image we see how Astor imagined these flying devices, by chance that they resemble airplanes? We also see this ship that worked with "Apergy", which he describes in the book.
Keep in mind that he is writing a "novel" but right now it seems that he knew more. Of course, the historical events happened differently but in terms of inventions it was very "successful".
Here I leave the book for you to review, in chapter IV the interesting begins.

Project Gutenberg Etext of A Journey in Other Worlds by J. J. Astor

Finally, this is another "fiction novel" The angel of the revolution Where the ships are similar to those that appear in a fascinating collection of strange watercolors and collage pieces. Over 2,500 intriguing drawings of flying machines from Dellschau. 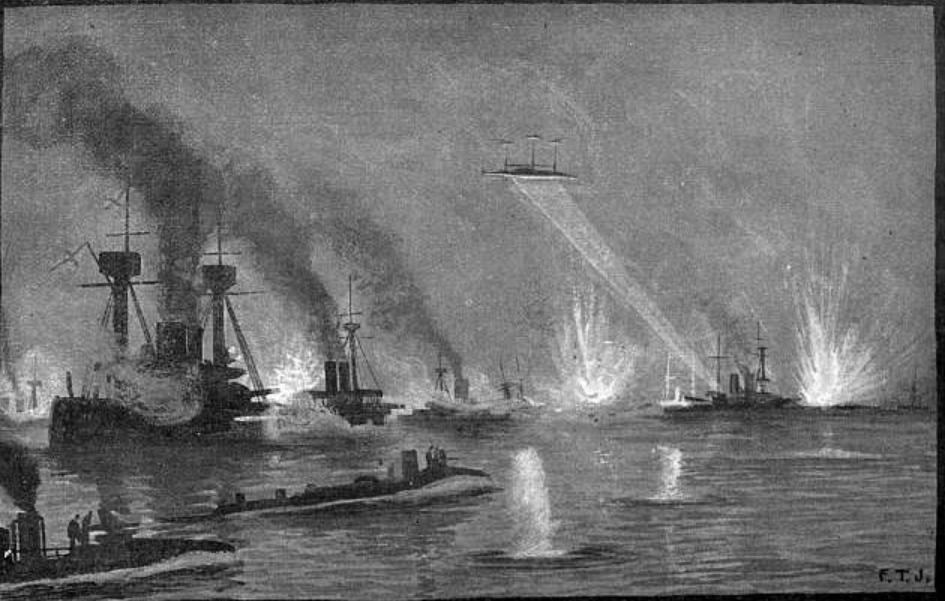 An eerie mix of Jules Verne's futuristic air warfare fantasies told the story of a group of self-described "terrorists" who conquer the world through aircraft warfare. Led by a brilliant and crippled Russian Jew and his daughter, the 'angel' Natasha, 'The Sisterhood of Liberty' establishes a 'pax aeronautica' over the earth after a young inventor mastered flight technology in 1903. The hero he falls in love with Natasha and joins her war against established society in general and the Russian Tsar in particular.

"Brotherhood of Liberty", the revolutionary organization of anarchists, nihilists and socialists determined to end the society of oppression and misery. Arnold completed construction of the first airship to fly the skies over Earth: the Ariel. the "terrorists" - as everyone called the members of this secret order - decided to show the world the destructive power of the aircraft. Meanwhile, after forty years of peace, the European powers were preparing for the inevitable final clash: plans were drawn up, treaties were signed and tested, armies were equipped and mobilized. Trying to control the coming war and make the war end all wars, the terrorists set out to find a suitable place for headquarters from where they could send orders and organize their own troops without being distracted. A region in the middle of Africa, called Aerial by the English explorers who found it, was a perfect place.
As Europe plunged into war between the Anglo-Teutonic Alliance (led by Britain, Germany and Austria) and the Franco-Slavic League (led by Russia, France and Italy)
The two men attract my attention, because if I do not remember that Napoleon and Alexander I were actually friends, only this in 1812, perhaps nothing to see but it caught my attention.
And I know that many of you know these two novels perfectly, what do you think of them?
Above all, these Flying Ships were very devastating in these wars:
However, due to a momentary lack of caution, the terrorists lost an aircraft to the Russians, due to treason in their own ranks. By chasing the lost ship in an attempt to recover or destroy it, the terrorists demonstrated the superiority of their flying machines over any other human machine, including the Russian and French war balloons. Finally recovering the lost aircraft, they witnessed the destructive power that the Franco-Slavic League had at its disposal against the Anglo-Teutonic Alliance, which assured them that Britain and her allies had no chance of winning such a war.
As the European war drew irresistibly close to the shores of Britain, with Germany completely falling under the power of the Russian Tsar
This sister had an American section ...
On the night of October 4, 1904, the order was passed to millions of secret followers of the Brotherhood in America and the next day production was completely stopped, the streets and institutions were taken over by organized masses and the government was overthrown. The new government arrested the big capitalists who planned to use the European conflict to further profit by supplying the Franco-Slavic League, and with the threat of airships and a mass of troops dedicated to the Brotherhood Cause, the terrorists proclaimed a new anglo. -Saxon Federation. Soon Canada faced the same fate and the terrorists headed to Britain with a proposal: either face total destruction by Russian and French forces, or become part of the Federation. The British government rejected the proposal, willing to fight to the end and still hoping that the islands could not be taken by any continental army.
At the height of his power, the Tsar of Russia was already awaiting Britain's surrender and was caught off guard when the new army emerged in Britain: the army summoned by terrorists, just as they did in America. Even greater was the Tsar's surprise when he realized that the terrorists had thousands of their men in their own ranks. With the help of aircraft and troops from the American section, the Brotherhood, which now acts as the Anglo-Saxon Federation, quickly destroyed almost all Russian, French and Italian troops, forcing the surrender of all armies and ending the world war in just two days. .

If you read all the text, thank you! Even more if you can tell me what you think of them?

HELLBOY said:
Even more if you can tell me what you think of them?
Click to expand...

Socialist, undercover intelligence operative, Darwinist and Eugenicist, and Round Table propangandist.
To quote from his "The Open Conspiracy" book:

Firstly, the entirely provisional nature of all existing governments, and the entirely provisional nature, therefore, of all loyalties associated therewith:
Secondly, the supreme importance of population control in human biology and the possibility it affords us of a release from the pressure of the struggle for existence on ourselves; and
Thirdly, the urgent necessity of protective resistance against the present traditional drift towards war.
Click to expand...

Do you think he or Orso Welles thought up the infamous "War of the Worlds" social engineering experiment themselves ?

Science fiction holds us in the illusion of living in a future.
Who decides what future is offered up?

kd-755 said:
Who decides what future is offered up?
Click to expand...

I wonder how much of the futuristic Sci-Fi is not predictive programming.

Minute 1:07, in the upper right, above the buildings passes what appears to be some kind of plane.
But we are talking about 1907 !!
Lucky to still have this video, something ahead of its time according to what the official story sells us.
You must log in or register to reply here.
Similar threads