Once coincidences start piling up, it's time for a suspicion. In my recent thread titled "Real mission of the 1907-1909 US Great White Fleet, what was it?" I pointed out an interesting catastrophic event which occurred during the voyage of the fleet. There could be more, but I did not specifically look for additional ones yet. If somebody else wants to assist, be my guest.

The 1908 Messina earthquake occurred on 28 December in Sicily and Calabria. Coincidentally, the great White Fleet of the United States was where? It appears it was right there. Coincidence? Could be.

Below you can see the cut out from the White Fleet Itinerary. Just below it, is an image of a part of the Fleet's route.

I doubt we have very accurate data as far as times and locations go. Yet, we can place the Great White Fleet within a week, and definitely in the area of the so-called Messian earthquake.

​
The 1908 Messina earthquake (also known as the 1908 Messina and Reggio earthquake) occurred on 28 December in Sicily and Calabria, southern Italy with a moment magnitude of 7.1 and a maximum Mercalli intensity of XI (Extreme). The cities of Messina and Reggio Calabria were almost completely destroyed and between 75,000 and 200,000 lives were lost.


Messina Before the Earthquake

​
KD: It would be interesting to figure out what historically important objects could be located in Messina. We can see that "Tartarian" type of architecture was destroyed, but was there anything else to it?

Messina After the Earthquake

Messina - Star City
​
Being an old town allegedly established in 8th century BC, Messina used to be shaped and bordered according to the most prominent star-shaped designs. Of course in reality it could be 8th century AD, but that's a separate story.

Not much of the star design has survived, but you can still see some left on the google earth image.

​
ART​
I found a few somewhat older etchings/paintngs of Messina. Not sure if they could be useful, but are still an interesting bunch to take a look at.

Plan of reconstruction after the Earthquake
​
Unexecuted Beaux-Arts plan for the reconstruction of the port, 1909. I do not know what people in 1909 thought of their abilities, but execution of this 1909 plan in 2018 would probably take a few days, a couple of dollars and a whole lot of infrastructure support .

* * * * *
​
KD thoughts: I don't know, whether it was an Earthquake, or them Sicilians simply made a mistake of not building a Welcome Arch for the Great White Fleet. The kind of Arch, a whole bunch of other visited countries greeted the members of the Fleet with. And only history knows whether those were Arches of Triumph, or Arches of Defeat.

An Afterthought
Could they be after this?

EVIDENCE OF BOMBARDMENT?
​
There appears to be no official documented proof directly suggesting any wrongdoing. Besides little things which start to come out during a prolonged research. Like the below 1909 "Catalog of Copyright Entries". Unless it pertains to the Revolutionary Bombardment of 1848, this could be our only direct evidence that Messina was destroyed by gunfire, rather than by an earthquake.

​
Yet, there still might be an unknown factor. Otherwise why would we have texts like the ones below? Could there be an additional player in all of this?

It gets even crazier...

Officially, first sentry gun prototypes were developed in 1973.​
A sentry gun is a weapon that is automatically aimed and fired at targets that are detected by sensors. The earliest functioning military sentry guns were the close-in weapon systems point-defense weapons, such as the Phalanx CIWS, used for detecting and destroying short range incoming missiles and enemy aircraft first, used exclusively on naval assets, and now also as land-based defenses

The site search on here is not brilliant as it couldn't find this page using the term Messina or the term earthquake in fact it said there were no results. I knew it was here as I read it and the linked replies a few days ago.

Here are a couple of pictures from the recent British Library upload to flickr which show the layout of Messina in the landscape which may shed some light on the devastation of the place.
Colour engraving from 1812 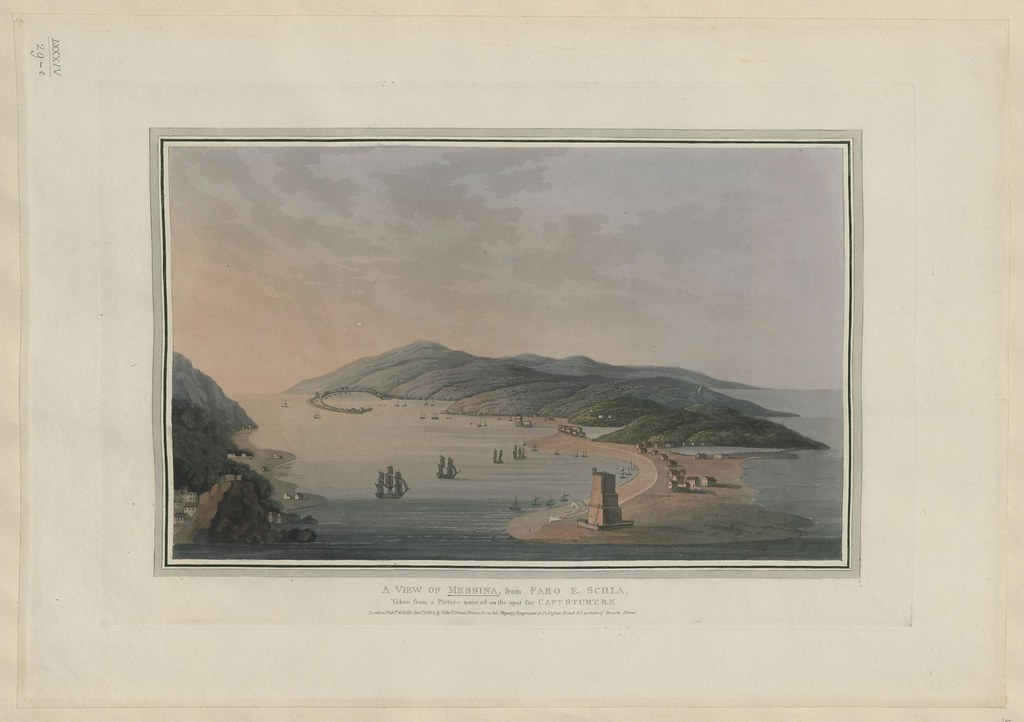 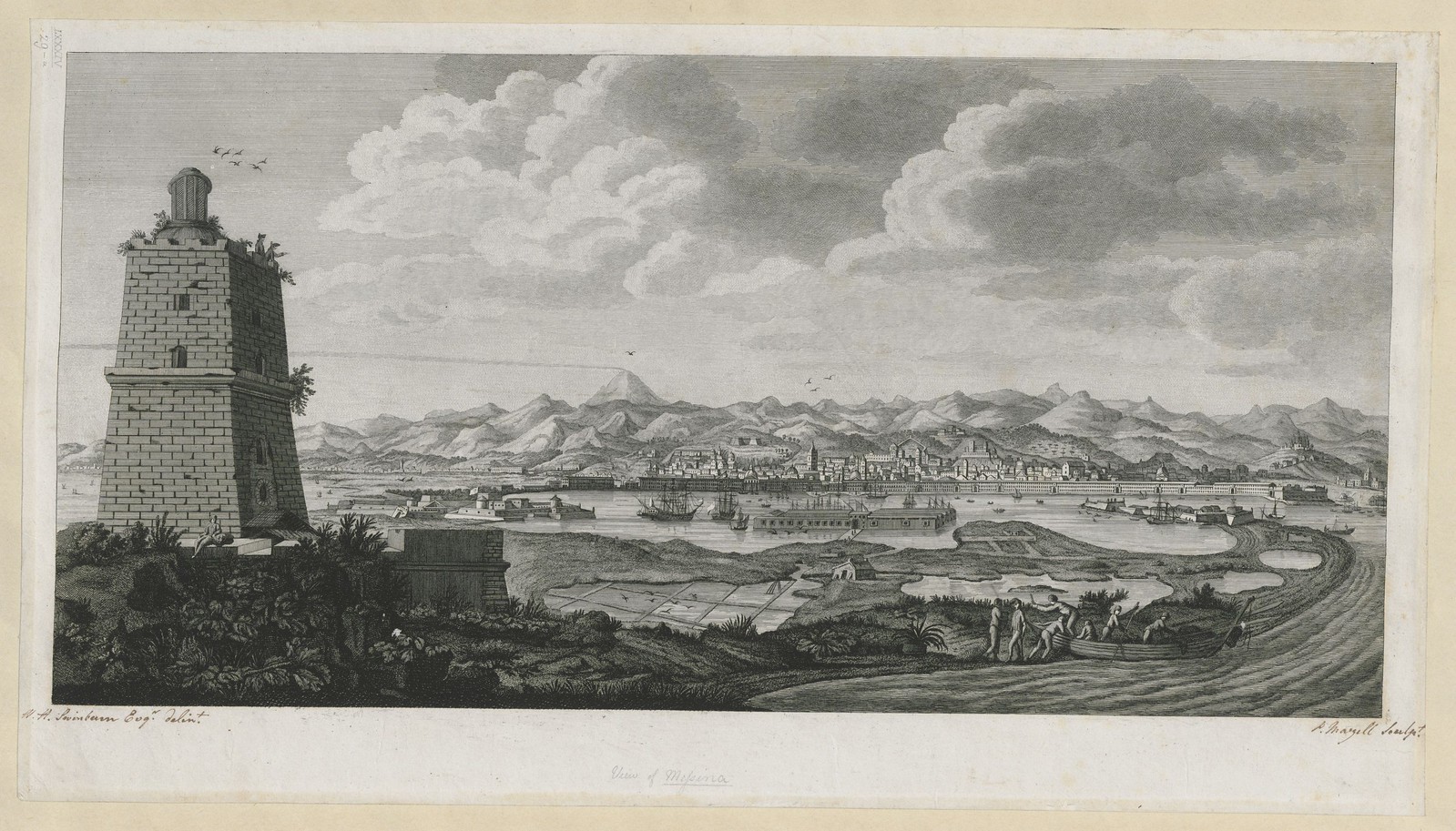 I think Messina was definitely part of the deeply ancient worldwide high civilizations. "Star Civ."
General Patton and Montgomery knew it was a key port for the Invasion of Italy in WW2.
I really doubt the American Great White Fleet would have bombarded it. Why?
The worldwide press would have had a field day with that story.

Being between Scylla and Charybdis (a.k.a. Garofalo) is an idiom deriving from Greek mythology, which has been associated with the proverbial advice "to choose the lesser of two evils". Scylla and Charybdis were mythical sea monsters noted by Homer; Greek mythology sited them on opposite sides of the Strait of Messina between Sicily and Calabria, on the Italian mainland. Scylla was rationalized as a rock shoal (described as a six-headed sea monster) on the Calabrian side of the strait and Charybdis was a whirlpool off the coast of Sicily. They were regarded as maritime hazards located close enough to each other that they posed an inescapable threat to passing sailors; avoiding Charybdis meant passing too close to Scylla and vice versa. According to Homer's account, Odysseus was advised to pass by Scylla and lose only a few sailors, rather than risk the loss of his entire ship in the whirlpool. The story was often applied to political situations at a later date. 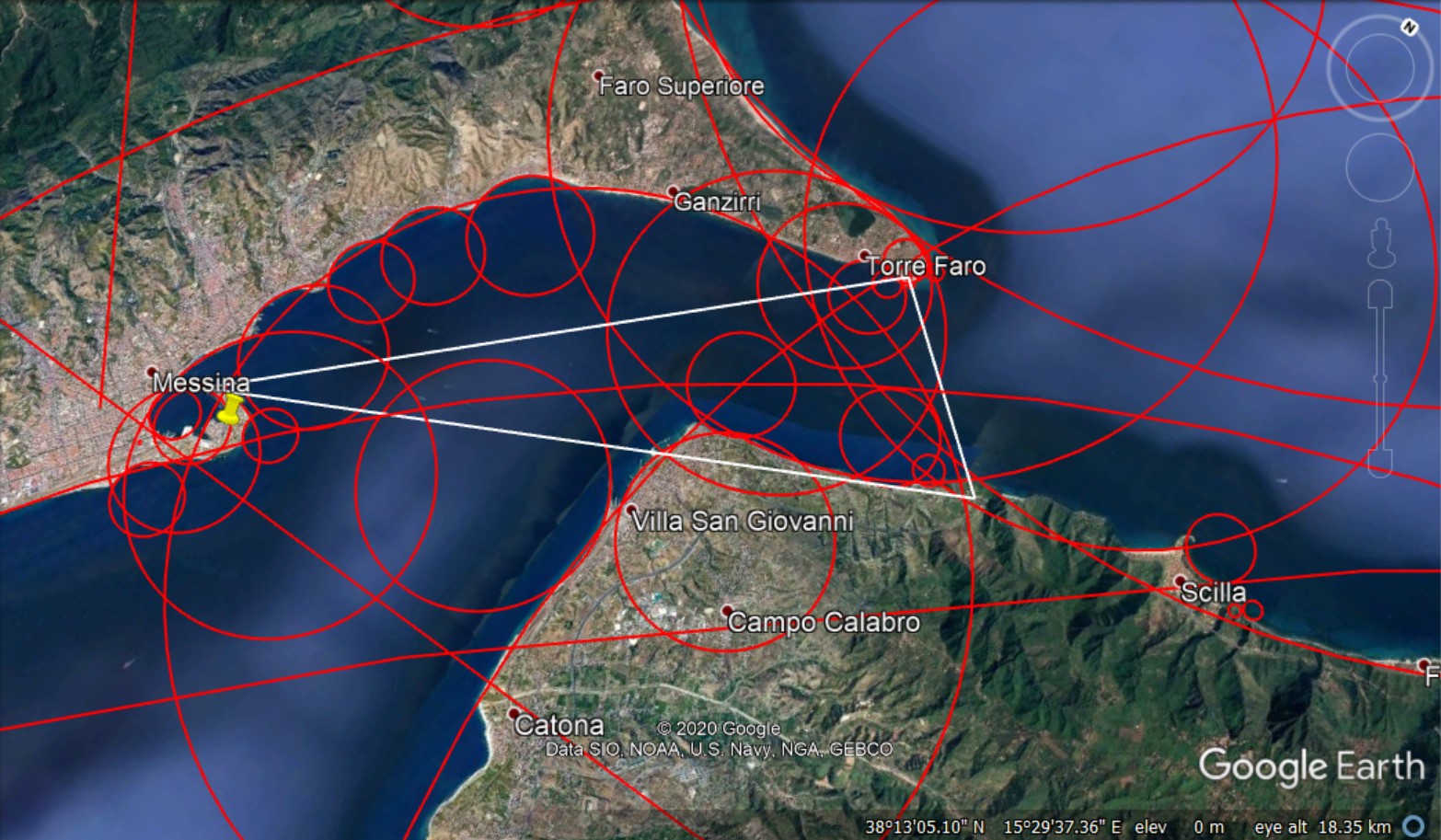 Trinacria is (still) a flag of Sicily (see below). The Trinacria itself is a symbolic representation of the zenith of the soul in its present state of existence, and the setting of the spiritual essence in its totality. It represents self-realization and ascension. Source: Michelle Gibson's video. 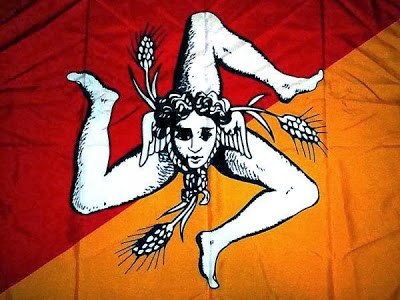 Also note the Moorish flags of neighboring Sardinia and Corsica. What does this tell you? 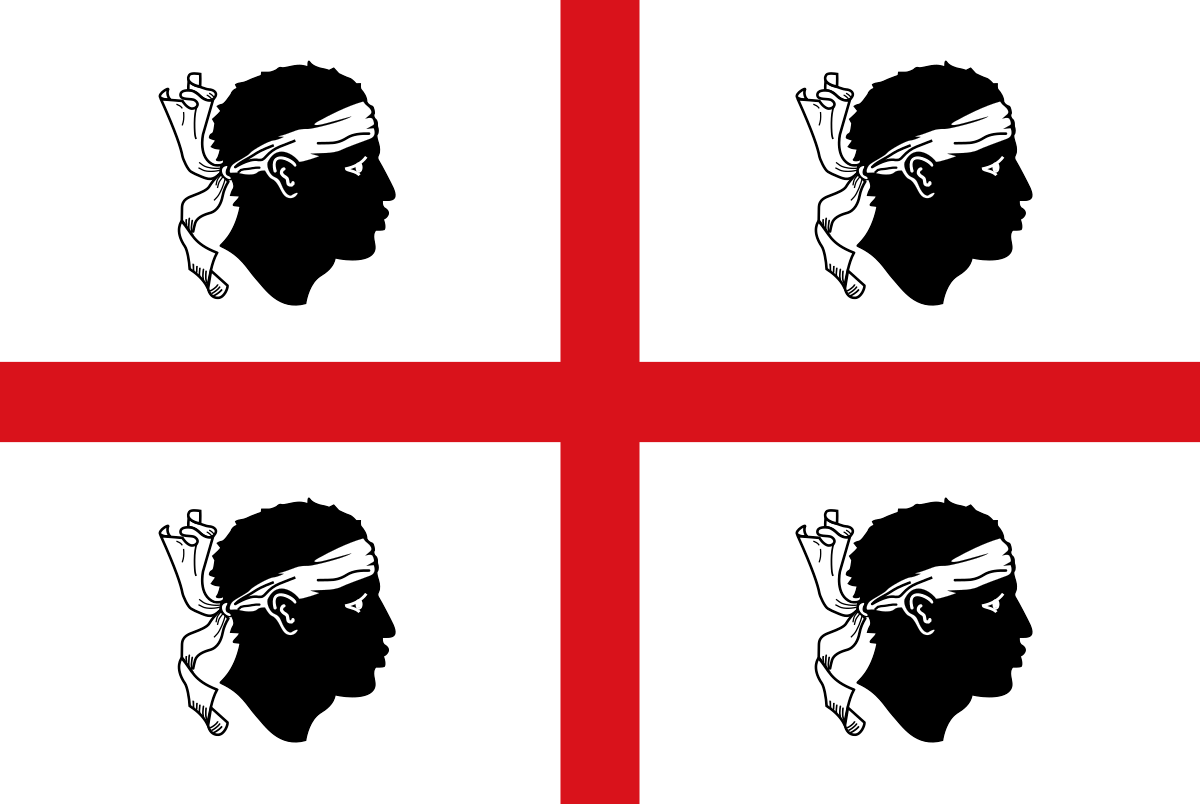 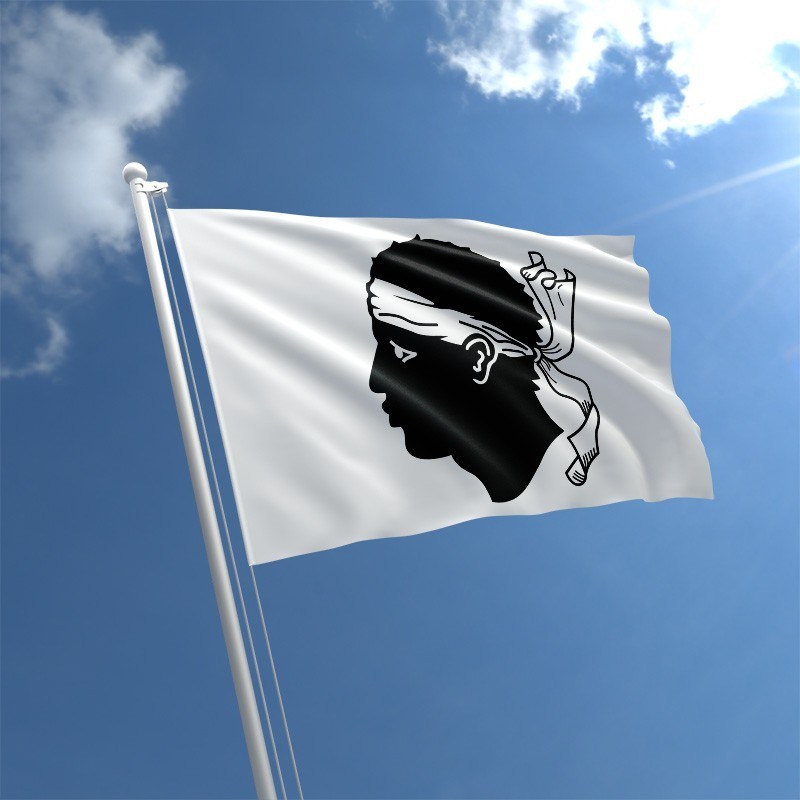 This is the flag of the Isle of Man, with a shape called the Triskelion. 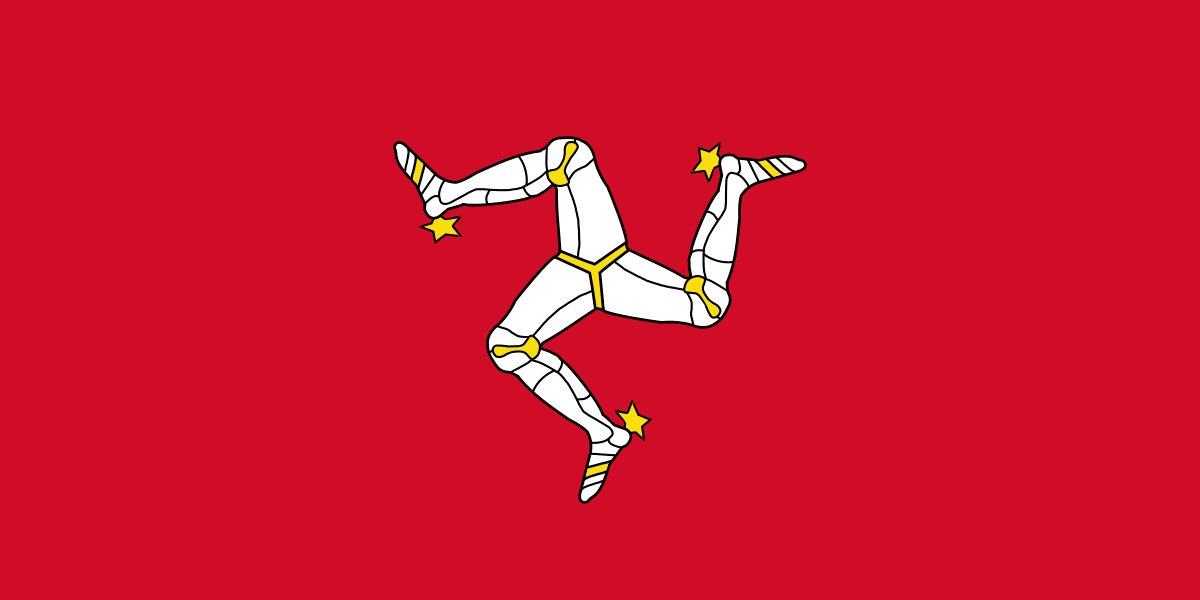