SH Archive Abandoned 1867 Moscow, Russia. Where are the people?

Here we can observe the same issue of having no people in the streets of a 19th century city. This time it is Moscow Russia. The year in 1867.

A few of the photographs (last 2) will not show the streets, but I wanted to put those up anyways, in case you spot something in the architecture.

I didn't even see people in the windows. One thing that stood out to me was the stark contrast between the modern clap-trap, ugly buildings and the older, sumptuous edifices. It's curious that in Russia, an area frequently covered in heavy snow, that some of these older buildings would have large flat roofs. Was the weather not as cold or snowy when the older buildings went up? ALL of the modern buildings have sloped roofs.

why so many ladders going to the rooftops?

JustWow said:
But I feel it somewhat safe to assume that the fires actually happened, what ever the dates actually are.
Click to expand...

We still have that question of what these fires were in reality.

Definately not long exposures. Even on a relatively calm & wind free day you will get lots of softness/ blur from movements in trees etc, there is none.

My guess, faster than 1/ 50th second of exposure, so people, trafic, animals, any movement would be obvious. This town is deserted.

Edit. Discovered something on 3rd image.

People on the bridge/ dam left highlight? Surveying? And bombed, destroyed building on the right?

People in picture one two they hadn't all loaded when i clicked on it..
Left hand picture:
man stood (on something) in the middle of the enormously wide road lower left on the incline. To the right is another man stood by the railing.
Ahead of him where the smaller road joins the other there is a woman and another figure right on the corner.
The flag in the foreground is painted in but just to the left of the flag and 'up a bit' at the base of the brick/stone bank is a man wearing a waistcoat and white shirt stood on something I cannot make out with his left arm clearly visible. There is someone smaller stood behind his back and their shadow is seen on whatever it is they are standing on.
Middle picture:
At the point where twin sets of steps going down to the river meet the road there is a man on a horse. Ahead of him on the road and in line with the gable of the floating building there are a group of people and vehicles to indistinct to define further save to say there is at least one on horseback.
On the foreground bridge just above the 67 there is a ghostly man and woman. To their right alongside the railing on the next span there are two ghost men walking left to right. One near either bridge support buttress's.
There are two people on the river under that span. Under the second ghostly man there is someone with white shirt and dark pants almost under the first ghostly man but to the right a ways is a figure wearing the reverse colour combination.
Another ghostly figure appears in the middle of the road in front of the hut right where the bridge joins the land. Another pair appear by the rail on the short stretch of road in the lower left foreground. Directly below them on the river is a man/boy in a white shirt holding his arms up.
Right hand picture:
nothing.
Although the left hand and middle pictures match up well the right hand and middle pictures don't match at all. I feel one section is missing.

Post automatically merged: 1/21/19
this one https://stolenhistory.org/attachments/1867_moscow_russia_abandoned_3-jpg.5407/
middle picture: the large roof with the large ladder up to it is completely painted in as in the roof next to it. Even easier to see on that one.
the small building inbetween isn't really there as its painted in. Check the windows.

This site posts an abnormal amount of videos that are suddenly censored and disappear from YT. Or are they restricted only where I live?

It's a possibility that this history and the evidence in those videos is being hidden to avoid upsetting existing narratives.

We're giving it away! Cheaters!
Just play the game and change or remove words. Make it seem "fictional" or about something else, with different names and words and lots of

I just had to ask, did whatever decimated all the people also have an affect on animals.
Livestock, pets, in the wild or nature.
Maybe the zombie epidemic already happened. They all moved HERE.
M

As an indication of whether hardly any people in the city is the lack of smoke from cooking, industry, engines, etc. The city doesn't look burned at all and seems to be in pristine condition with no garbage in the streets, rivers, etc. What ever happened caused the people to disappear without a trace.

Does look like possible flood residuals near waterfront. Stained buildings. Can't tell if that's just where they dealt with livestock. Boards floating in water... Exposed riverbed like something had washed through. Lots of ladders to rooftops, with no sign of work going on. And a FEW ghost people and carts and horses. A FEW.
M

Starmonkey said:
Does look like possible flood residuals near waterfront. Stained buildings. Can't tell if that's just where they dealt with livestock. Boards floating in water... Exposed riverbed like something had washed through. Lots of ladders to rooftops, with no sign of work going on. And a FEW ghost people and carts and horses. A FEW.
Click to expand...

Unlike the devastation that Rome experienced with partially or wholly destroyed buildings during the reset(s) the cities like these are left in pristine condition with no fires, a bit of mud, perhaps a river overflowing a bit but no massive destruction. It killed the people and animals and plants without physical destruction of the infrastructure.

Maybe its not even Moscow.
Maybe its just a ghost city / fake city.
I don't know the source of those pictures

I traced the first one through Google images and came to this website.

Martin Scherer shot the first photographic panorama of Moscow, published in 1867 and which became one of the best documentary panoramas of the city.
Click to expand...

Who is Martin Scherer? Sounds Germanic.

In the same 1867, the company “Scherer, Nabgolts, the former A. Bergner” was sold to a native of Kurland, a talented photographer Albert Ivanovich May, on a rental basis, which allowed her to retain her previous merits. Since that time, it has become known as “Scherer, Nabgolts and Co.”
Click to expand...

Couldn't find anything on Martin Scherer.

In search of the company I found this website.

A collection of photographs of buildings, churches, streets, and localities—detailed Moscow circular panorama: the photographs were taken by the Scherer and Nabgolts company from the Cathedral of Christ the Savior in 1867 and published in 16 lithographic plates in 1886 by the Kushner and K° typolithography.
Click to expand...

I also found a book on amazon related to these photos.

In 1880-ies. in the cultural life of Moscow was a significant event - were published in four editions of the "Moscow. Cathedrals, churches and monasteries ", containing photographs of all Moscow churches. The author and initiator of the collection was the famous Moscow businessman, social activist, ethnographer, philanthropist and benefactor Nikolai Naidenov. Presented in this photo album - priceless relics of the past. The purpose of publishing "in the preservation of the memory of the future on the existing kinds of churches in Moscow." By order Naydenova was organized large-scale expensive photographing all the surviving cathedrals, churches and monasteries of Moscow. Shoot it made better by the time Moscow company "Scherer.
Click to expand...

In my search for Nikolai, I came here.

Many were originally part of Romanov palace libraries nationalized by the Soviet government and sold abroad for hard currency.
Click to expand...

The website also says this:
The website talks about Naidenov, N. A. (Nikolai Aleksandrovich) (1834-1905)
He could be Nikolai Naidenov.

Couldn't find anything on Albert Ivanovich May.

Is there any significance to this flag? 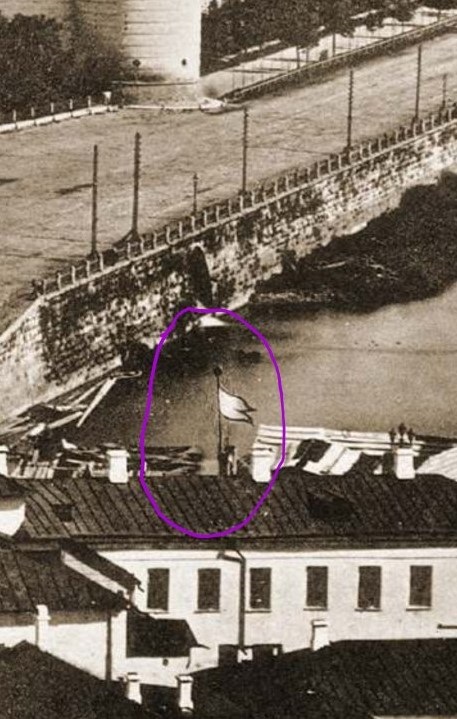 SH Archive Lady of Elche, and Lady of Guardamar: what are they wearing?

SH Archive Single photo: Members of the commune at the hotel de ville ...

SH Archive Who are these people?