ORIGINS​
"The origins of the fables pre-date the Greeks. Sumerian proverbs, written some 1,500 years before Christ, share similar characteristics and structure as the later Greek fables. The Sumerian proverbs included an animal character and often contained some practical piece of advice for living (“You should not boast; then your words will be trusted”). The writing style of both the earlier proverbs and the later fables were simple and direct. Neither contains many words. The situations re-counted in the stories begin with some type of incident and conclude with a punch line which would transform into the oft-recognized moral of the tale. It is much later that writers would begin to include the moral either at the beginning of the story (designed to tell the reader the purpose of the tale upfront) or was added to the end (to instruct the reader what the story was supposed to teach). Ultimately, the fables are designed to highlight both desired and undesirable human behaviors: what to do or what not to do."

"Politically, the fables emerged in a time period of Greek history when authoritarian rule often made free and open speech dangerous for the speaker. The fables served as a means by which criticisms against the government could be expressed without fear of punishment. In effect, the stories served as a code by which the weak and powerless could speak out against the strong and powerful." Aesop's Fables


Nostradennis​
Could something other than wisdom nuggets been coded into Aesop's fables? Is there hidden history in Aesop's fables that's now ready for a closer scrutiny? Could these fables be traced back to the northern ten tribes of Israel in which nuggets of scriptural knowledge were surreptitiously handed down both during and after their Assyrian captivity? There is knowledge of biblical wisdom here to be sure. Could ancient Old Testament wisdom, prophecy and history been coded into Aesop's fables? Was ancient Hebrew wisdom sifted from the proverbs and canticles of Solomon or gleaned from revered prophetical books and transcribed into Aesop's Fables? A lot of questions for sure so let's take a closer look.

The Kingdom of the Lion (Aesop)
When I first read Aesop's 'The Kingdom of the Lion' I couldn't help but think that I was reading something familiar in scripture and something similar from the book of (Isaiah LVI. 9) where "All ye beasts of the field come to devour, all ye beasts of the forest" looks an awful like "beasts of the field and forest" from Aesop. Could this similarity been an intentional veiled reference of how Hebrew scripture, wisdom and history was to be relayed to the Israelite captives and grab their attention like a "hear ye, hear ye" or "illy beany chilly beany the spirits are about to speak"?

"And one of the ancients said to me: Weep not: behold the lion of the tribe of Juda, the root of David, hath prevailed to open the book and to loose the seven seals thereof" (Revelation v. 5)

"Juda is a lion's whelp: to the prey, my son, thou art gone up: resting thou hast couched as a lion, and as a lioness, who shall rouse him? The sceptre shall not be taken away from Juda, nor a ruler from his thigh, till he come that is to be sent, and he shall be the expectation of nations" (Genesis XLIX. 9-10)

Onto "a general assembly of all the birds and beasts" could possibly convey a structured worship service known in the Temple at that time where "birds and beasts" (re: angels and men) would gather together or even the last judgement for that matter.

Next there's this "drew up conditions for a universal league" could be a loose reference to an adherence of the Mosaic Decalogue as the cornerstone for a moral society. A how to live correctly manual if you will.

And "in which the wolf and the lamb, the panther and the kid, the tiger and the stag, the dog and the hare, should live together in perfect peace and amity" parallels Isaiah's "the wolf shall dwell with the lamb: and the leopard shall lie down with the kid: the calf and the lion, and the sheep shall abide together" (compare with Isaiah passage below)

Finally there's the "Oh, how I have longed to see this day, in which the weak shall take their place without fear by the side of the strong" where I see a semblance in Isaiah's "but he shall judge the poor with justice, and shall reprove with equity the meek of the earth...and justice shall be the girdle of his loins: and faith the girdle of his reins". (compare with Isaiah passage below)

"And there shall come forth a rod out of the root of Jesse, and a flower shall rise up out of his root. And the spirit of the Lord shall rest upon him: the spirit of wisdom, and of understanding, the spirit of counsel, and of fortitude, the spirit of knowledge, and of godliness. And he shall be filled with the spirit of the fear of the Lord, He shall not judge according to the sight of the eyes, nor reprove according to the hearing of the ears. But he shall judge the poor with justice, and shall reprove with equity the meek of the earth: and he shall strike the earth with the rod of his mouth, and with the breath of his lips he shall slay the wicked. And justice shall be the girdle of his loins: and faith the girdle of his reins. The wolf shall dwell with the lamb: and the leopard shall lie down with the kid: the calf and the lion, and the sheep shall abide together, and a little child shall lead them. The calf and the bear shall feed: their young ones shall rest together: and the lion shall eat straw like the ox. And the sucking child shall play on other hole of the asp: and the weaned child shall thrust his hand into the den of the basilisk. They shall not hurt, nor shall they kill in all my holy mountain, for the earth is filled with the knowledge of the Lord, as the covering waters of the sea. In that day the root of Jesse, who standeth for an ensign of the people, him the Gentiles shall beseech, and his sepulchre shall be glorious. And it shall come to pass in that day, that the Lord shall set his hand the second time to possess the remnant of his people, which shall be left from the Assyrians, and from Egypt, and from Phetros, and from Ethiopia, and from Elam, and from Sennaar, and from Emath, and from the islands of the sea. And he shall set up a standard unto the nations, and shall assemble the fugitives of Israel, and shall gather together the dispersed of Juda from the four quarters of the earth." (Isaiah XI. 1-12)

Unfortunately, not only did these Lost Ten Tribes of Israel lose their homeland but they also lost their identity as well and sort of became the ten lost Hekawi tribes of Europe.


​
"Aesop was a Greek storyteller born in approximately 620 BCE. Tradition says he was born as a slave, but developed a real talent for fables that were used to teach truths in a simple, understandable way." Aesop's Fables - Timeless Stories with a Moral


Nostradennis​
What does the phrase "born as a slave" mean? Well, it could mean born or raised in captivity. And what does "to teach truths" or "real talent" mean? And who's truths? Could this "to teach truths" been a covert system of concealment? Could this have been a cold war communication of sacred 'truths' transmitted through fables while in captivity? Instead of a message in a bottle Aesop would use a message in a fable. Was Aesop a 'real talent' cold war Hebrew prophet? Was this the reason why he was hurled over a high precipice at Delphi and killed? G.K. Chesterton remarks from his introduction that "it is for those who read the Fables to judge whether he was really thrown over the cliff for being ugly and offensive, or rather for being highly moral and correct".

The timeline of the historical Aesop also coincides with the very time of the Assyrian captivity and the Lost Ten Tribes of Israel's exile into Armenia and the Caucasus Mountains. This Lost Ten Tribes method for retaining past cultural history is what we might call mythology today. This stong sense of preservation produced a collective state of mind which Eusebius coined Praeparatio evangelica - Wikipedia . Eusebius offers a lengthy argument for the wisdom of the ancient Hebrews becoming a preparation for Greek philosophy. For Eusebius, the Greeks stole any truths they possessed from the more ancient Hebrews. Maybe because they were also of a common stock.
"It is found in writing concerning the Spartans, and the Jews, that they are brethren, and that they are of the stock of Abraham"
(1 Maccabees XII. 21) Maybe the reason why Jesus the Good Shepherd taught in parables was because His Lost Sheep were being prepared by fables?

Here are some other Aesop Fables with either Old Testament similarities or New Testament Praeparatio evangelica.

Bonus Link: Aesop and Son:
​
P.S. Re-read the "INTRODUCTION ON AESOP'S FABLES BY G. K. CHESTERTON" in its entirety. A second read through may give a deeper unifying clarity of the whole. G.K. Chesterton Introduction - Fables of Aesop

Note: Archived SH.org replies to this OP: Aesop's Fables and the Lost Ten Tribes of Israel
Click to expand...

Great breakdown of the material. Love the way you compare the verses directly with the fables. A compelling case I hope you can develop further to help us along this most peculiarly verboten topic. Thanks for laying out this groundwork!

Nostradennis said:
Tree lore is a suspected ancient school of knowledge with roots stretching back into our earliest symbolic imaginations. The Tree is a common universal, archetypal symbol that can be found in many different traditions around the ancient world. Trees are symbols of physical and spiritual nourishment, transformation and liberation, sustenance, spiritual growth, union and fertility. The tree is a spiritual motif and framework, a map of conception and consciousness that brings together the temporal worlds of time, space and consciousness. Trees are the places of birth and death; they are used as sacred shrines and places of spiritual pilgrimage, ritual, ceremony and celebration. Sacred trees are found in the Shamanic, Hindu, Egyptian, Sumerian, Toltec, Mayan, Norse, Celtic and Christian traditions. -Ancient Wisdom Web
Click to expand...

Great post, very interesting. Lots to think about, but this bit in particular made me think about the link between the Gaelic alphabet and trees 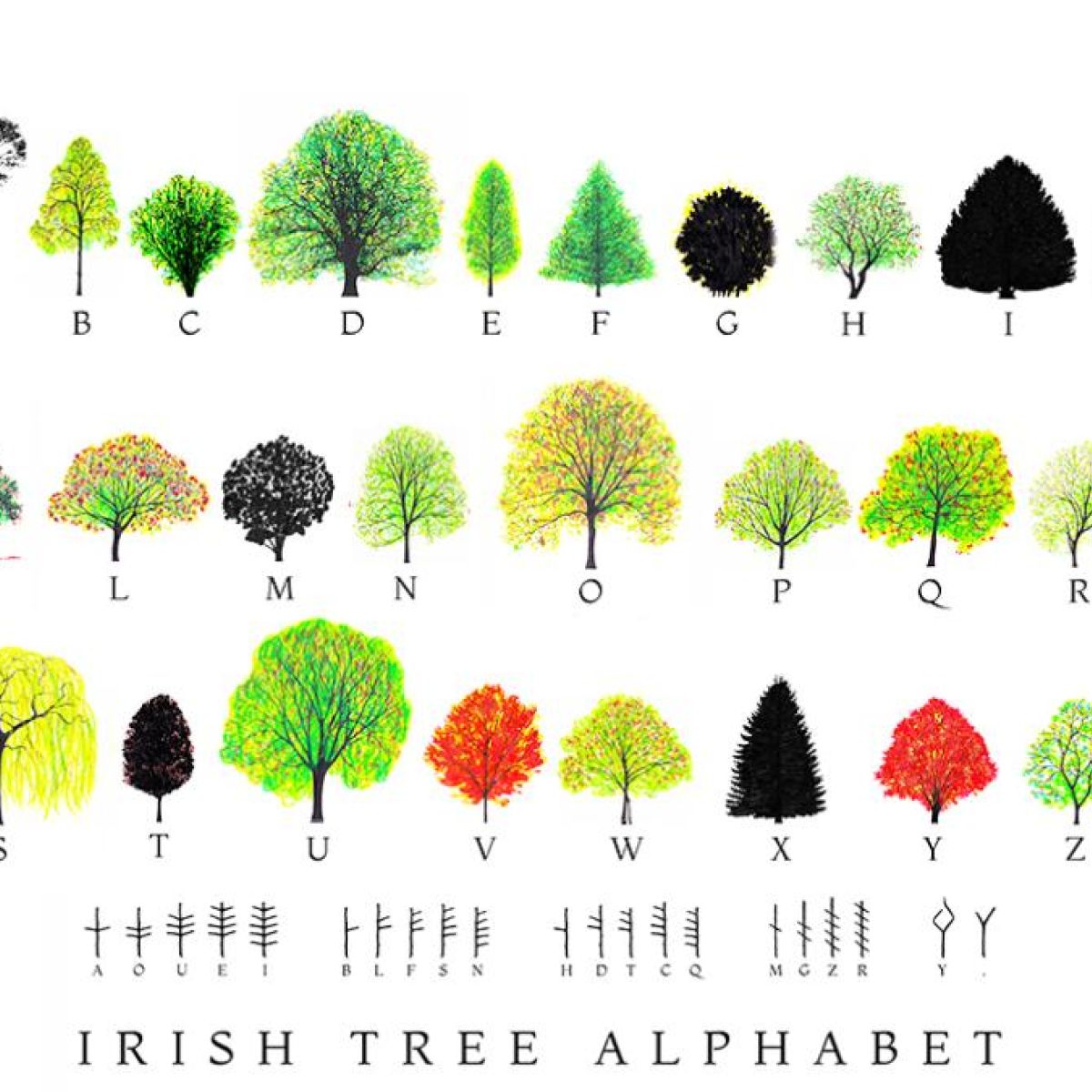 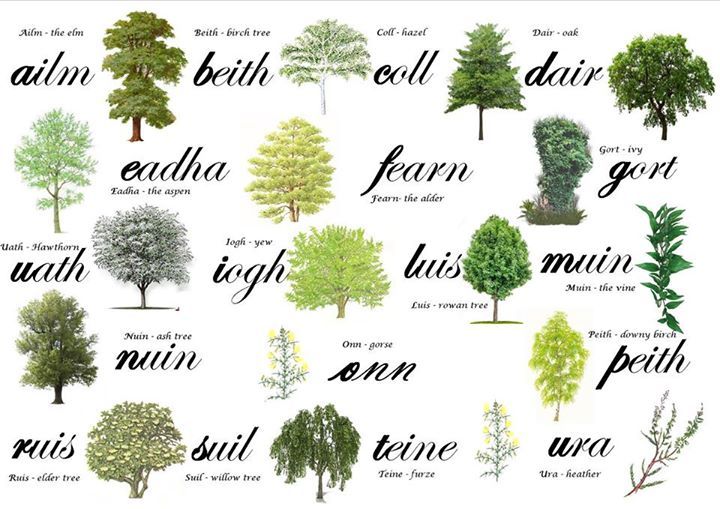 Do other alphabets have this link?
You must log in or register to reply here.
Similar threads