Can You Stand The Truth? The Chronicle of Man’s Imprisonment 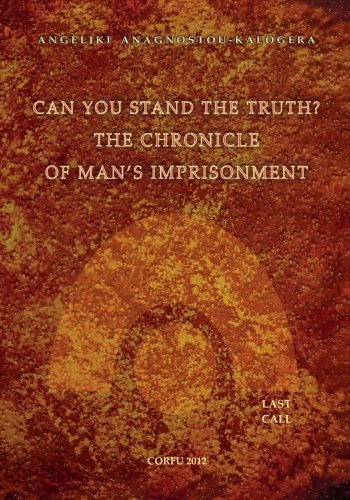 Background​
I read this Gnosticism-infused epic a few years ago now. It makes for a fascinatingly out-there – some might go further and call it bat-shit crazy – densely-referenced theory of everything, if sometimes hard going. While many of the principles will be familiar, some of the conclusions the author reaches may be less so. Some of the terms used also take a bit of chewing on, and the language and explanations can be rather opaque, so apologies if this summary is a little obscure in places.

The author proposes an entirely corrupted material creation, one in which all elements and entities, positive and negative, are essentially feeding on humankind. Beyond the false creation of the demiurge, in which we find ourselves, there is the “Hyper Cosmoi of Light”. This Hyper Cosmoi, by dint of this corrupted material creation, appears to preside over a functionally flawed existence, one in which there occurs the periodic energisation of forbidden waste matter/dead carcasses, “the hell left behind by the leftovers of the previous unsuccessful material creation”. This cyclical vitalisation process occurs through each successive “Creator-Nous”.

The nature of this, in terms of first principles, isn’t fully elucidated – why this hellish waste matter is allowed to persist, for example – but seems to suggest the idea that Chaos pre-exists, or co-exists with the Hyper Cosmoi as a founding dualism (suggesting shades of Zoroastrianism).

A new cycle of creation begins with an extended “Light Ray”. It appears that with this there is concomitant scope for unfavourable explorations, in our case producing the demiurge (on the face of it, there is a contradiction here, since the Light Ray must in due course return to the Hyper-Cosmoi; surely then, so should the demiurge and constituent parts it fostered, rather than finishing up in a hell state.)

“Celestial Man”, imbued with the “Divine Spark” subsequently left the Hyper-Cosmoi in order to mount a salvage operation on the demiurge’s creation, but became embroiled in it.


Current and Forthcoming Developments​
The entire universe is preparing for the withdrawal of the “Archetypes of Creation”. This will result in intense repercussions for the world of matter (affecting the entire solar system, the Sun and the Earth). The planet and solar system will experience a temperature increase. There will be a melting of icecaps – so Greta will be pleased – resulting in a domino effect of natural disasters. In addition, once the poles are stripped of ice, the two great apertures that exist below them will be revealed. This will allow the “dangerous beings living in the Earth’s hollows” to pass to the surface. A weakening of the Earth’s magnetic field will result in reversal of the magnetic poles, leaving the Earth unprotected from solar radiation bombardment.

This process of withdrawal will see that which is part of the Hyper Cosmoi, the extended Light Ray, return to source. The period between the commencement and the completion of withdrawal – the intermediate phase that will result in the spiritual transference of men and the Earth “in order to join the Holy State of the Father” – will be the most testing. It will be accompanied by the dissolution of the natural laws of matter. The astro-aetheric bodies of man will cease to function in the usual way. The disturbance of the boundaries between dimensions will lead to the appearance of skeptomorphic and astral powers in our reality; their regions will be the first abandoned by the “Life-giving Force” (as it returns to the Hyper-Cosmoi). Humanity will identify these entities as “evil aliens” (I’m unclear how we’re expected to characterise the sudden arrival of the dangerous beings living in the Earth’s hollows).

Following this, the higher astral will follow suit; the “positive” skeptomorphic and astral powers will vacate this realm for ours, appearing here with the intention of saving men from their lower counterparts (the “evil aliens”); the accompanying potential for deception this carries – of their true nature – will be the most severe of all.

At the time of “first resurrection”, escapees from the material world will be welcomed to a place of restitution and preparation (having exited the demiurge’s creation). For the rest, matter will cease to exist in its current form; they will find themselves in a parallel alternative universe of the fifth dimension.

In order to actualise this universe, new consciousness/prison bodies will be required for the souls the controllers of this creation manage to trap. Adjustments to man’s generic code will be necessary, in order to create a new body that will survive in the future (parallel) universal conditions, so imprisoning the stored living soul (to this end, the author characterises abductions as the experimental path towards developing these hybrid bodies). These bodies will constitute a mixture of human DNA and elements from the bodies of astral beings. They parallel virtual universe has been labelled the fifth dimension, this designation being the archons’ fake-out intended to deceive mediums and channels into accepting the trap.

DUMBs are used for keeping/developing these prison bodies. Nanotech will be utilised as a means of achieving the required genetic mutation, enabling the transformation of the astro-aetheric bodies into an energy-body/net/grid (the author compares this to Avatar).

Implantation of this extremely dangerous “element” or biochip will be accomplished by injection into the human organism, designed to mutate its structure. Using some “imperative need” as a pretext, the nations of the world will convince humanity to accept this, presenting it as “something different from what it will actually be” (the marking of the Beast).

If accepted, this element will irrevocably entrap the soul in this parallel universe, preventing it from escaping to higher territories. Following that, the “inspectors” of this world (I think she means human and non-human controllers), with their new hybrid material bodies, will attempt the final transformation.

Their intent is to transport humanity into this parallel universe through the creation of a space-time wormhole in Earth’s environment (via CERN). The success of this process is not guaranteed, so other measures are also planned; starship-arks have also been developed for escape to the fifth dimension.

With regard to a plan for population reduction, the author holds that this will come about due to natural/cosmic events (collision with an asteroid/Planet X/Nibiru/Apophis). Humanity will be greatly diminished and many will lose their lives; 90 percent will be left to die. But since the entire population will be marked and their souls are trapped in the astro-aetheric bodies, they will incarnate into the parallel universe inside new hybrid bodies. In ignorance, they will form a new race of men there, smoothly adapting to the new conditions.

The remaining select few (the 10 percent) will take shelter from the unfolding cosmic phenomena underground before embarking to the starship-arks. These have been developed by the space program – the funding of which requires an ever-increasing financial crisis – and they will lead them far from Earth. After modification, the 10 percent will also settle in the new area of the parallel universe, which will now be dressed up (copied and pasted) with real matter. Thus, they will prepare the way for new incarnations of men/souls (the 90 percent) to born in that world. The explanation – one accepted by the 10 percent – will be that this change is “evolutionary”. Global government is essential to achieving this ultimate end.

Only a “doubly virtual life” exists in this parallel universe, one that will persist until the last drop of energy has been consumed out of every alternative possibility. Upon which, those continuing there will fade into the second death, which is the ultimate hell.

As a consequence of recognising this inevitability, the men of the future, “gazing at the bottom of the material vortex that threatens them, attempt the ultimate time-jump and come from their place and time into your present-time reality looking for salvation” (it seems these are the Greys).

The “Truly Selected Ones” who consciously choose salvation – those to be transferred to the “Prepared Place” – must not receive the injection. They will need to strengthen themselves in spirit during this difficult time – the intermediate phase prior to the completion of the withdrawal – cutting themselves off from emotional bonds with matter and patiently awaiting their freedom from the material world. Those entering the new spiritual state will come to realise it as “True Life” for the first time, their previous experience recognised as merely an imitation.


Additional Notes​
All “ET” presences – well, those that aren’t future parallel dimension “humans – are essentially archons or “skeptomorphs” (these forces, having materialised into matter as ETs, have furnished the technological progress necessary for planned developments).

There is no intelligent life anywhere else in the material universe. be occupied by A standard globe-model Earth appears to this universe. References appear to credit the Moon landings as legit.

The Titans, giants and Nephilim were skeptomorphic powers.

By its nature, the positive/negative corrupted creation carries with it negative connotations for such practices as channelling.

Dinosaurs were rendered extinct by an asteroid. Dinosaurs were also the original “prison” form fashioned for Celestial Man (those with the divine spark).

There are Celestial Men, plain souls and astral men. The first category carries the Divine Spark. The second are the creations of the demiurge and his minions. The third are formed of a quasi-soul or artificial spirit and constitute the greater portion of mankind (they are the cause for the population explosion, not new souls/spirits). They have a strong inability to understand spirituality (while plain souls exhibit an “intensely slavish religiousness, with limited spiritual inquisitiveness”).

There is a warning that those with the Divine Spark accepting gifts (vision, prophecy, healing) sacrifice their ability to return to “the Fatherlands”.
You must log in or register to reply here.
Similar threads