Concerning its rEAl shape, even for the continents, we do have no possibility to verify for ourselves, but have to buy - or not !! -, whatever EL-ites offer us as official science. Now this Electromagnetic Model is, what I have figured out after lots of dot connecting.

We are electromagnetic beings & we live in an electromagnetic realm, everything here is energy, frequency & vibration. Solid matter is an illusion, atoms are merely vibrating energy. Each atom, each molecule has a different frequency pattern.

We literally live in a WATER"world". WATER is the most important & abundant element here. Almost 70% of this realm consists of WATER, the same % of WATER circulates in the human body.

WATER is a LIQUID CRYSTAL, its geometric structure is a tetraeder, one of the platonic bodies. It is the geometry, that is responsible for the energy content, not the matter itself. WATER is an electrical conductor, a solvent, a cleaner & a transporter /transmitter of energy = information. It is special & does not follow the Law of Physics. Everything is more or less fluid, even the air we breathe contains more or less WATER vapor.

AIR turns into a pale blue mobile liquid, when it is exposed to very cool temperatures, as it happens higher up in the atmosphere. The SUN is a projection of light in liquid air, as well as the moon & stars.

LANDMASSES are not fixed, but they literally „float“ on SALTWATER. Parts of the continents can break apart, entire regions can sink or emerge, WATER can liquify the soil. This happens sometimes after Earthquakes through the VIBRATIONS in the soil. Natural disasters are deliberately triggered !!!

The pushing force of WATER can move the continents: the cause of Climate change. That is why England had Vineyards 300 years ago. It was warmer then & got colder because the land was moved under a colder zone under the local SUN. It is not the magnetic North Pole that wanders, but the land is being moved.

There are huge underground rivers & lakes flowing like bloodvessels below the soil, called AQUIFERS. They are what is commonly known as LEY LINES. They are being refilled through RAIN & through SALTWATER pushing UP from the ocean below the land & that is being filtered into fresh water.
At the bottom of the ocean are underwater rivers & lakes containing denser SALTWATER, with their own wave system & fishes, … . This SALTWATER might push up as well through layers of sediments & rocks. Could even be the same WATER as above.

There is no physical dome / firmament above. STARS are the electromagnetic frequency grid, that repells or keeps the WATER & LIQUID AIR separated. Stars are projections of light = energy = frequency = information.

This realm is a huge ENERGY Generator & BATTERY powered by humans !
Everything we do or even the act of thinking is only possible because we produce electrolytes & have an internal DC flow. Our blood contains 0.9% SALTwater.

Note: Archived SH.org replies to this OP: Electromagnetic Realm – an Air pocket in a Water "world"
Click to expand...

Obviously that pic couldn't be recovered ... it should be this one 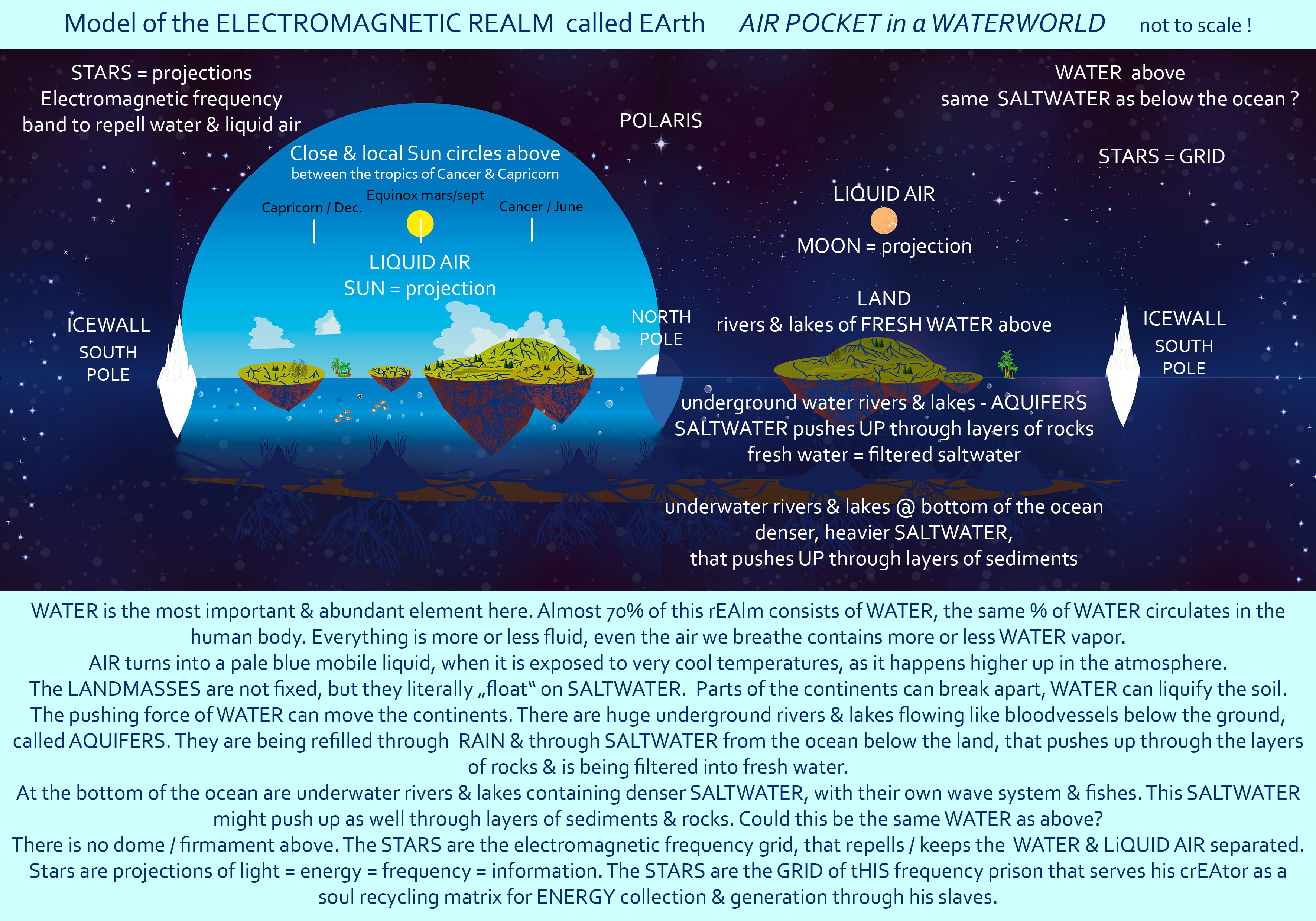 The Aquifers = Ley Lines
You must log in or register to reply here.
Similar threads