Ibn ʿAbd al-Ḥakam was an Egyptian Muslim historian who wrote a work generally known as The Conquest of Egypt and North Africa and Spain. This work is considered one of the earliest Arabic Islamic histories to have survived to the present day.

803 A.D - 871 A.D
​
ʿAbd ar-Raḥman ibn ʿAbd al-Ḥakam was, strictly speaking, a traditionist rather than a pure historian. He was interested mainly in historical incidents which illustrated early Muslim Arab customs which he could use to teach Islamic law. His sources were books compiled by very early traditionists and now lost, and oral sources such as his own father. His work is an almost invaluable source as arguably the earliest Arab account of the Islamic conquests of the countries it deals with. However, it was written some 200 years after the events it describes, and therefore largely mixes facts with later legends.

​
The above paragraph is how our science discredits unacceptable historical accounts contradicting their dogmatic version. Isn’t it the exact same way our contemporary history science is working? Or those 19th century cornerstone works on Ancient Rome and the Medieval were put together by the actual witnesses of the described events? Yet, our official scientists will discredit any historical source to meet their agenda. This is how we got duped in first place, ladies and gentlemen.
> Good thing Poggio Bracciolini did not know every single language in the world, otherwise this source could be compromised as well.


ALEXANDRIA​
Alexandria was founded around a small, ancient Egyptian town c. 332 BC by Alexander the Great. It became an important center of Hellenistic civilization and remained the capital of Ptolemaic (Greek) Egypt and Roman and Byzantine Egypt for almost 1000 years, until the Muslim conquest of Egypt in AD 641, when a new capital was founded at Fustat (later absorbed into Cairo).

The Conquest of Egypt and North Africa and Spain
by Ibn ʿAbd al-Ḥakam (803 A.D. - 871 A.D.)
On the building of Alexandria
​
There are five excerpts which I would like to point out:
Short summary of the above:
Based on the above "short summary", there are a few questions to ask, I believe.
While the above two questions are very interesting, they are above my head right now. Quick googling of the name Shaddād ibn ‘Ād produced produced four candidates.
Out of the four, only Antarah ibn Shaddad the poet fits the time frame. He flourished in 580 A.D., which is before Ibn ʿAbd al-Ḥakam. The guy was also a warrior. He was a son of an Arabian warrior and enslaved Ethiopian princess who gained fame and freedom due to his intellect, poetry, and courage in battle: 6-7th c. A.D. Anyways, I obviously do not know if it was him mentioned by Ibn ʿAbd al-Ḥakam, but here is what he looked like.

This leaves us with two remaining "short summary" points

3. "constituency of dough" marble​
Meet Lorenzo Bernini. He was an Italian sculptor and architect. While a major figure in the world of architecture, he was, also and even more prominently, the leading sculptor of his age, credited with creating the Baroque style of sculpture.

1598-1680​
This is probably where I could say, "Meet your faux marble antique statues, Ladies, and Gentlemen".

​
Of course our scientists deny that the meaning of the above had any literal context. We are lead to believe that it's all just an allegory. I personally think that Bernini (just like quite a few before [ancient Alexandria], and quite a few after) figured out how to make faux marble.

Well, let us move on from the 1600s to this 19th century related Wikipedia article called, "Marbelizing". In this article we read the following:
Marble summary: Our dogmatic scientists want us to believe that if the bird walks like a duck, swims like a duck, and quacks like a duck - it's a set of x-ray binoculars. Because this is exactly what we will need to see through the clouds of lies tainting our education. Authors of the past talk about "pliable marble" in the 8th, 17th and 19th centuries. Pretty sure some additional digging would produce scores of extra evidence.

We are led to believe that "dumb and stupid" ancients used sleds, and carriages to transport super heavy stones from hundreds of miles away. Yet, Ancient Romans (though I do not think there was anything Empire, or Republic related in Rome) use Roman Concrete left and right. If you read this wikipedia article, you will see that their concrete appears to be superior to ours. Time frame? Who knows, but wiki says, "It is uncertain when Roman concrete was developed, but it was clearly in widespread and customary use from about 150 BC; some scholars believe it was developed a century before that." Phantom "scholars" can believe in whatever. They clearly do not know but choose to BS everyone. It could be a century, it could be 10,000 years, or it could be a million years. They do not know.

​
And if you do not think that Roman Concrete was better than ours, consider that the Pantheon dome is the world's largest and oldest unreinforced concrete dome. Still up there, right? Built 113–125 A. D.

​
How do you think "Ancient Egyptians" built them Pyramids?

1. Alexander the Great a.k.a. Dhul Qarnayn ​
This part of the riddle was a bit trickier. There are plenty of interesting material out there pertaining to why some consider Dhul-Qarnayn and Alexander the Great to be one and the same. Below are a few links if you want to educate yourself:
Bottom line, there are hundreds, if not thousands of different articles, discussions, comparisons etc. And what they all say does not really matter. The dogmatic history made up its opinion.
You make your own conclusion on the above two bullets. What we do know, is that we have two weird facts pertaining to both gentlemen.

Fact 1
A little detail to add is this. According to a legend current in Jewish circles around the early first century CE, the Scythians are identified with Gog and Magog. The basic elements of the legend are found in Flavius Josephus and letters of Saint Jerome. From myself can add that Scythians appear to dissolve within the Tartarian Empire.

No Image Found​
Silver tetradrachmon(ancient Greek coin) issued in the name of Alexander the Great, depicting Alexander with the horns of Ammon-Ra(242/241 BC, posthumous issue). Displayed at the British Museum.

​
And as I was looking through all this stuff I stumbled upon The Illustrated Chronicle of Ivan the Terrible.


The Illustrated Chronicle of Ivan the Terrible

​
The Illustrated Chronicle of Ivan the Terrible is the largest compilation of historical information ever assembled in medieval Russia. It covers the period from the creation of the world to the year 1567. The set of manuscripts was commissioned by Ivan the Terrible specifically for his royal library. The literal meaning of the Russian title is "face chronicle," alluding to the numerous hand-painted miniatures. The compilation consists of 10 volumes, containing about 10 thousand sheets of rag paper. It is illustrated with more than 16 thousand miniatures.

There I found this image of Alexander the Great praying to Ammon. Yup, the guy with horns in the middle is Ammon, the lady next to Ammon is Olympias (Alexander's mother), and the bent over gentleman on the right is Alexander the Great. (beer paid for the translation. Kudos goes to my neighbor)

​
A little googling produced this, "Alexander advanced on Egypt in later 332 BC, where he was regarded as a liberator. He was pronounced son of the deity Amun at the Oracle of Siwa Oasis in the Libyan desert. Henceforth, Alexander often referred to Zeus-Ammon as his true father, and after his death, currency depicted him adorned with the horns of a ram as a symbol of his divinity." And Zeus-Ammon link took me to the page of regular Zeus. But, allegedly, Zeus Ammon is supposed to look like this.

​
And here is where I understood that this "double horn" thing can not be understood due to the lack of pertinent information. I wonder if “The Burning of Heretical Books” had anything to do with this. "In his recent article, University of Oxford historian Alexander Murray examines several questions about the topic. He notes there are over 200 incidences of book burning in the Middle Ages. “There are one or two Carolingian cases,” Murray writes, “a few more in the Gregorian reform and a few more in the ‘twelfth-century renaissance’. It is around 1200 that the pace quickens, and from then on, scarcely a decade passes without a book-burning, the pace rising gradually, but with exceptional spurts between 1232 and 1319 when hitherto immune Jewish books were burned by the cartload." - source. I wonder what books did they really burn, and how many of those ended up in the secrets vaults of Vatican?

And considering that the "two horn" story does not end there, but rather continues with individuals like Oghuz Khagan, Cyrus the Great and a whole bunch of other ones, it is simply too confusing. Appears both Alexander and Dhul-Qarnayn are credited with building Alexandria. In general, it sounds like there was a herd of horned humanoids running around building cities, and starting wars.

Note: Archived SH.org replies to this OP: Faux marble, Alexander the Great, Dhul-Qarnayn, Ivan the Terrible and our Lost History
Click to expand...

Another possible example of faux marble, from the port city of Rome. https://upload.wikimedia.org/wikipedia/commons/e/ee/Ostia-mainbaths01.jpg

"The ancient Roman city of Ostia was in antiquity situated at the mouth of the river Tiber, some 30 kilometres to the west of Rome. The shoreline moved seawards, due to silting, from the Middle Ages until the 19th century. Therefore Ostia is today still lying next to the Tiber, but at a distance of some three kilometers from the beach." Ostia - Introduction

The columns look like solid marble with a nice swirly pattern. It had to have been applied vertically, after the brick core was completed. The tech may be similar to the geopolymer blocks of the Great Pyramid, since marble is chemically similar to limestone. 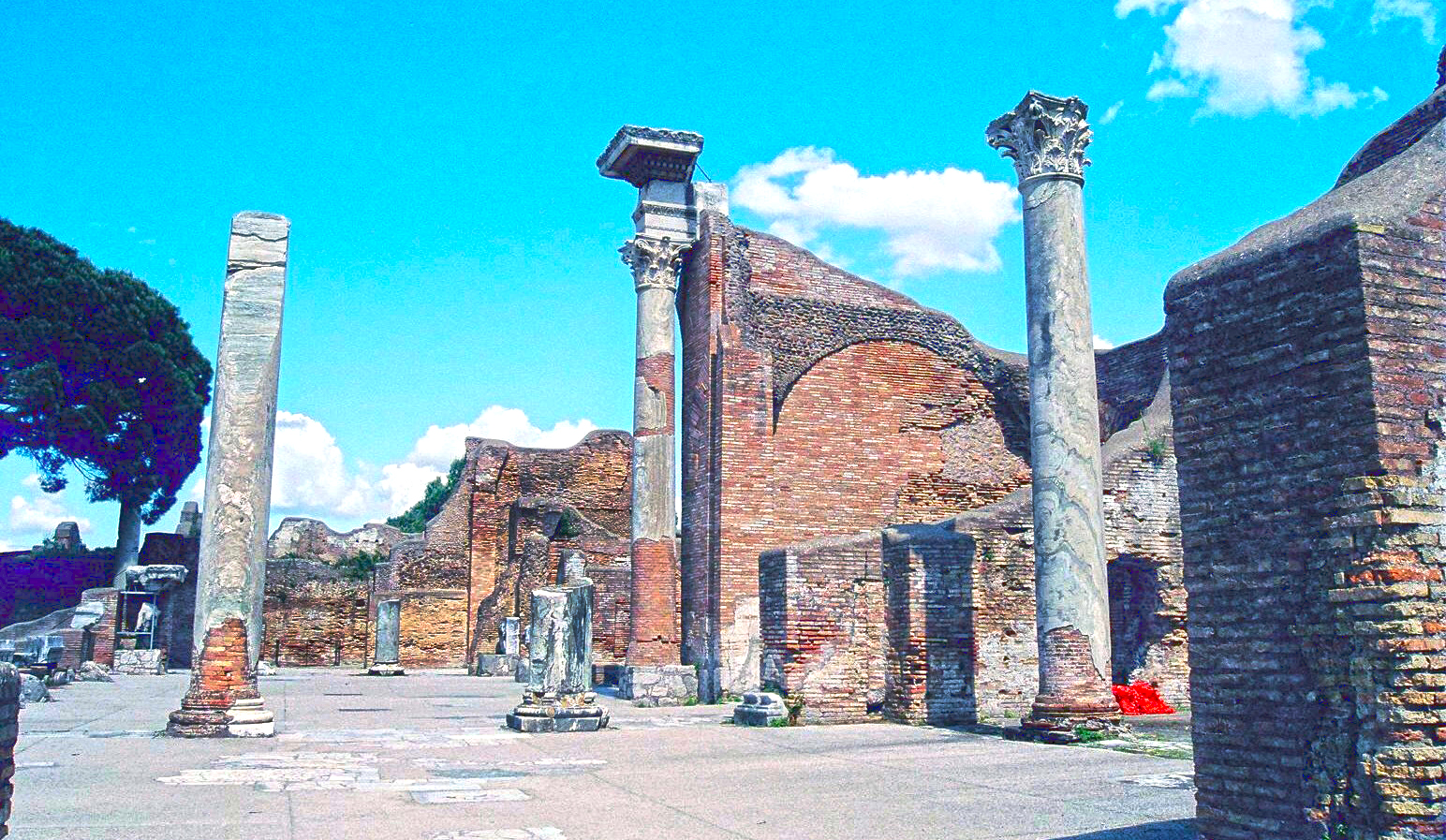