Admin Note: This thread is for posting interesting bits of information or links. It is not for discussion. Responses to posts won't be allowed and will be deleted without further comment or warning. This is strictly for posting things where you don't have time to start a complete thread. Everyone who finds interesting information in this thread and wants to discuss it further needs to put the info into a new thread. If you want to post a detailed request, go to Investigation Requests instead

I know for me and a lot of us here at stolenhistory.net that we sometimes don't have the time or skills to do the proper research needed to cover a new topic in detail but would like to get it out there for others to see and find of interest for this our community. Then others with the time/skills might want to look into a bit deeper and do a thread on that titbit.

This is what i was hoping to achieve when i started Loose Thread on the old forum. It got a bit sidetracked and sort of lost its way but besides the corona thread it was still the most popular thread back on SH.org. So i thought this would be a good time to start it afresh.

So much hard work involved in the information and knowledge from the old site is now lost or missing so titbits i hope is also somewhere to piece back some of that once more.

Posting video links is ok but please leave a comment as to why you find it to be relevant to our forum. Other links of interest are also ok with a comment.

Please try not to post unrelieved stuff like what song you liked today or what you had for lunch. Please keep it in line with forum guidelines found here Welcome Thread - Introduce Yourself

Also if you start a thread from a titbit please be polite and mention the comment and user of that titbit in your thread. Its a nice feeling to know we can all contribute here in some way as tiny as that might be.

Together we can make this forum an experience that all will remember and reference to in the near future.

EVIDENCE OF ANCIENT GODLIKE CHARACTERS AND Phoenicians IN AUSTRALIA

A long time ago I read a journal by a member of a western Australian exploration team where he described an encounter with an aboriginal tribe who had the features and mannerisms of Hebrews, I thought his name was Grey or Gray but in looking today for it I came across this journal, not the same guy, but he has some interesting observations also. When I find what I was looking for I will add it to this post.
Meanwhile anyone researching ancient civilizations/pheonicians presence in Australia may find this of use. 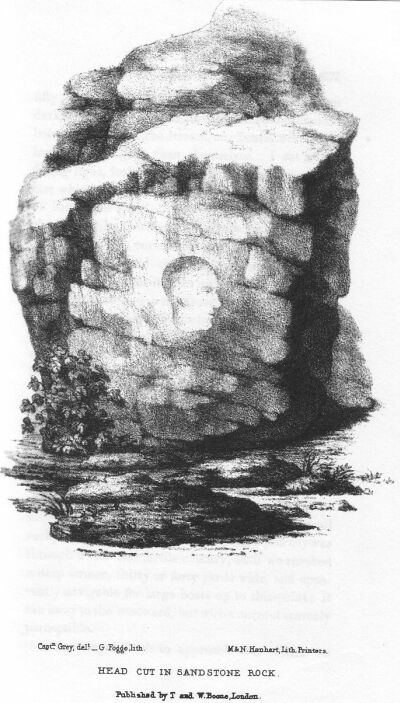 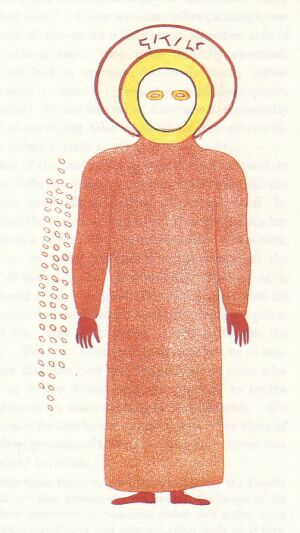 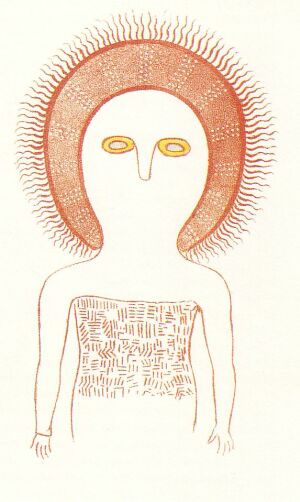 Refering to 2nd image he says; This figure brings to mind the description of the Prophet Ezekiel: Men portrayed upon the wall, the images of the Chaldeans portrayed in vermilion, girded with girdles upon their loins, exceeding in dyed attire upon their heads, all of them princes to look to, after the manner of the Babylonians of Chaldea, the land of their nativity. Chapter 23:14, 15.)

The natives of South-western Australia likewise pay a respect, almost amounting to veneration, to shining stones or pieces of crystal, which they call Teyl. None but their sorcerers or priests are allowed to touch these, and no bribe can induce an unqualified native to lay his hand on them.

The accordance of this word in sound and signification with the Baetyli mentioned in the following extract from Burder's Oriental Customs (volume 1 page 16) is remarkable:

And Jacob rose up early in the morning, and took the stone that he had put for his pillow, and set it up for a pillar, and poured oil upon the top of it, and he called the name of that place Bethel. Genesis 28:18

From this conduct of Jacob and this Hebrew appellation, the learned Bochart, with great ingenuity and reason, insists that the name and veneration of the sacred stones called Baetyli, so celebrated in all Pagan antiquity, were derived.

These Baetyli were stones of a round form, they were supposed to be animated by means of magical incantations, with a portion of the Deity; they were consulted on occasions of great and pressing emergency as a kind of divine oracle, and were suspended either round the neck or some other part of the body


FORMS ON MAKING VOWS AND PLEDGES.

Genesis chapter 24 verse 9. And the servant put his hand under the thigh of Abraham his master, and swore to him concerning that matter.

This is exactly the form that is observed in South-western Australia, when the natives swear amity to one another, or pledge themselves to aid one another in avenging a death.

The natives of the Gulf of Carpentaria, and also those on the eastern shores of St. Vincent's Gulf, practise the rite of circumcision. That is, this remarkable rite is known to be observed in two points of the continent of Australia exactly opposite to one another, and which are separated by a distance of about twelve hundred miles.

The injunctions contained in Deuteronomy chapter 23 verses 12 and 13 are literally fulfilled by the natives in several parts of the continent. In addition to my own testimony on this point I will refer to Wilson's Voyage round the World, page 165, where he states:

They are cleanly in their manners, and in some respects superior to the Europeans, fulfilling the injunction of Moses in the twelfth and thirteenth verses of the twenty-third chapter of Deuteronomy.

This passage relates to the natives of Raffles Bay on the extreme north of the continent of Australia, whereas I have observed the custom in the South-western parts of Australia.

Worth to look into: Dancing mania - Wikipedia

The strange "cart ruts" of Malta and Sardinia that go out to sea.
I'm exhausted....

So many things are misunderstood within the confines of modern thinking, understanding and blatant lies of history. We all as a collective have our own understandings of "where we come from" etc. For myself and my own opinion we all come from something. We may never understand it in our lifetime from now but we are inching ever closer to an understanding more so than the elite could've ever foretold. The elite forget that as we don't get the knowledge we so deserve, we will always find it. They forget that a little known thing called common sense will awaken us to the real problems that we face. All governments are in some form of group or forced by a more insider/smaller elite that rules ALL. We may never find out the exact form of history humanity actually took. We get told within the schooling system what they want us to know. They don't want us to dive deep into antiquity for a reason, but we all know deep down inside something isn't right.

10sec of something to think about.

A couple of interesting pieces from off Guardian here, on The Great Fire of London and The Gunpowder Plot (the latter is feeding into current events, but the points it raises about the official story might be worth further follow-up).

Many European (especially Italian) paintings from the middle-age/renaissance period:

I would like to recommend Brian Murarescu's The Immortality Key: The Secret History of the Religion with No Name. I am listening to the audiobook (read by the author) and I thought that many of you would enjoy it.

These reviews from Amazon describe it very well:

"The Immortality Key is an astonishing and remarkable book that explores the mysterious links between psychedelic drugs, human consciousness, and the origins of Christianity. It presents truly ground-breaking research on many levels, tracing the use of psychedelic drugs from Ancient Greece through Rome and into the early days of Christianity, where they played a role―possibly a crucial one―in the new religion of Jesus Christ. This is a fascinating book, which I highly recommend." ―Douglas Preston, #1 New York Times bestselling author of The Lost City of the Monkey God

"Like a modern-day Galileo, combining meticulous scholarly analysis with highly rarefied fieldwork, Muraresku is willing to bravely challenge sacred cow orthodoxies, unafraid of where the facts and evidence lead him. He has the standing and erudition to do so. Deftly weaving in humor and contemporary policy, Muraresku’s book is of utmost urgency in the search for what it means to be alive and inevitably die. This page-turner presents the hard archeological evidence substantiating the LSD-like chemical presence in the Eleusinian and Dionysian Mysteries, which carried on for thousands of years, reappearing in democratized form as the Eucharist in the mystery cult of early Christianity before its suppression under the Roman Empire. Here revealed are the true origins of the dominant religion of Western civilization, and the lengths to which its early progenitors went to preserve female spiritual leadership, and the psychedelic sacrament that was their lodestar." ―Sunil Kumar Aggarwal, MD, PhD, Co-Founder and Co-Director, AIMS Institute; Affiliate Assistant Professor of Rehabilitation Medicine and Geography, University of Washington

It seems every continent or culture has it's own pyschedelic drugs, here in europe it is the amanita muscaria, south america, ayahausca, egypt had its lotus flower, mescaline for the indians)native).

I know my own experiences with ayahausca showed me the fractal nature of the fibonacci sequence so i will give this a read or listen, thanks!

Little known Native American history and trans pacific migrations.
Legend has it many Native American tribes came from Lemuria by tunnel and by sea.
They give America a fantastic culture to admire.

This is something I discovered while watching American Horror Story last year. One of the seasons takes places in New Orleans, and features "The Axeman" who is based on a real life serial killer in New Orleans 1919. He writes a letter to the local paper before his last night out taking lives, and the final paragraph goes:

"Well, as I am cold and crave the warmth of my native Tartarus, and it is about time I leave your earthly home, I will cease my discourse. Hoping that thou wilt publish this, that it may go well with thee, I have been, am and will be the worst spirit that ever existed either in fact or realm of fancy."

I have no idea if his identity has been discovered as I literally just remembered this and wanted to post before I forgot again, but here is a probably not great link with more info:

Lately I came to the conclusion I must have been admitted to the asylum, and drugged continuously with hallucinogens.
Or so it seems.
Or am I dead and ended up in hell ...

... and with the liquid manure level rising, I might run for the escape hatch soon. 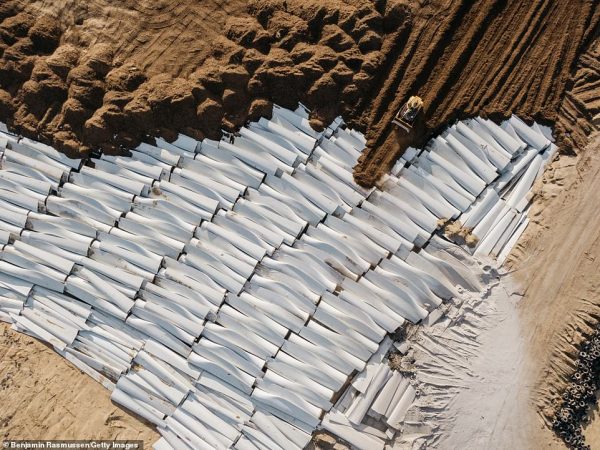 Who will dig them out? What will they think it was? When will it be? Will there be people like us who will say "These were used for energy production somehow" and blogs about "how the old earthlings built giant wind energy harvesting machines" but no one will believe them, their families think they're nuts?

https://books.google.it/books?id=UG...-KQKHYjTCxAQ6AEwBXoECAYQAg#v=onepage&q&f=trueBlair's chronological tables not revised (before 1856)

Ukrainian point of view on history
Historical Rehab of Ukraine-Ruthenia

Annunaki Files: Chronology of the origin of Man, Genetics, DNA, Races, and a theory of Resets
2

M
Cointelpro: Is StolenHistory.org being undermined by (or was it setup from the start) to be Cointelpro?