There are such strange observations from Air Google as straight roads.

Most likely these are the ruins of the former cities-megalopolises; these are strange roads to points; and channels. Naturally, they are very often used for power transmission lines, for gas pipelines and for building houses. Quite often they are used for fire-prevention glades. The problem is that it is impossible to make them (for example, to make them in the 19th century or in the 1930s by hand), it is very difficult, they will be overgrown with trees. Naturally, there are ordinary fire lines, lines for power lines, planting forests. But the strangeness of these "straight roads" will not leave you if you imagine what a colossal work it is. Yes, the trees grow poorly on them It is especially interesting when they are observed in sparsely populated areas Like Siberia, Perm, etc....

There used to be a great video of the WOW lines that stretch across the Ukraine by a guy called Colm Gibney who set up the, 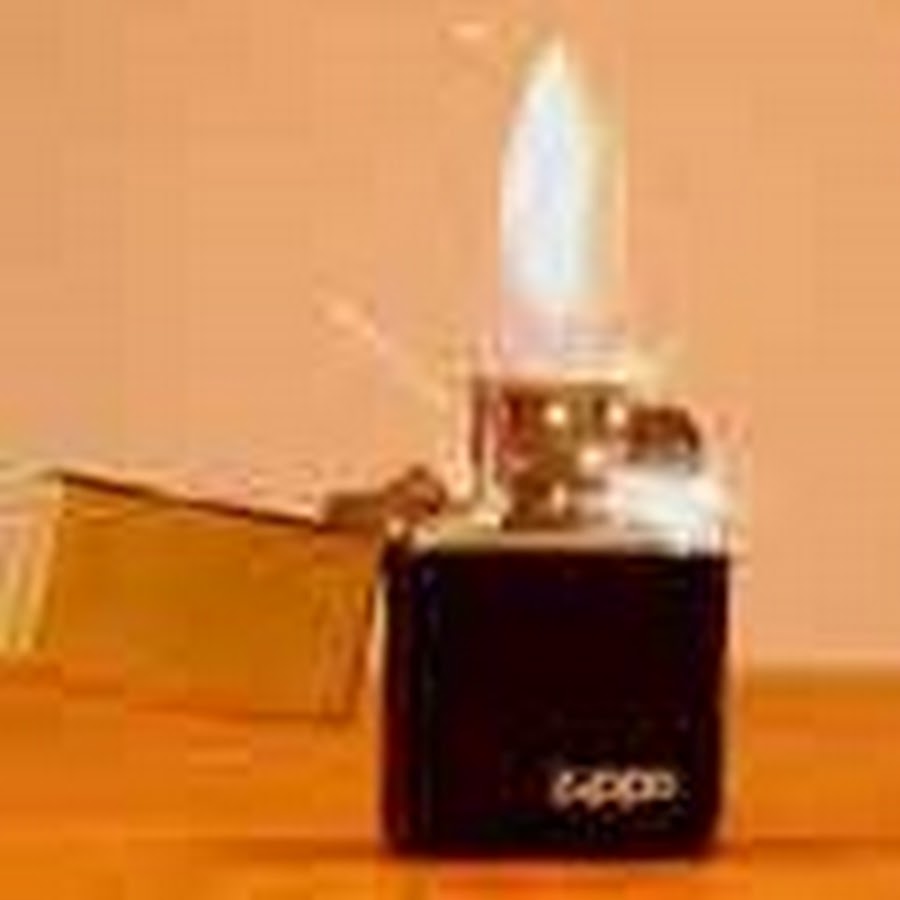 Looking for some answers.

I believe they are called the wow lines but unsure of that. They are over a km wide and go for what looks like hundreds of kms. There are more than one set this being the start of one of them. This one starts at the edge of some mountains. Link What i would like to know is how could this...

But it has been deleted from his channel and also the website has become non functioning, very strange.

I have a bunch of them marked up on my google earth and will take some pics, vast straight lines that look like highways, 70km long and 1.2 k wide.

You can see that these line were built a long time ago as the terrain has displaced some of them, do not house any modern power lines but yet seem to be well manicured and well maintained, very strange 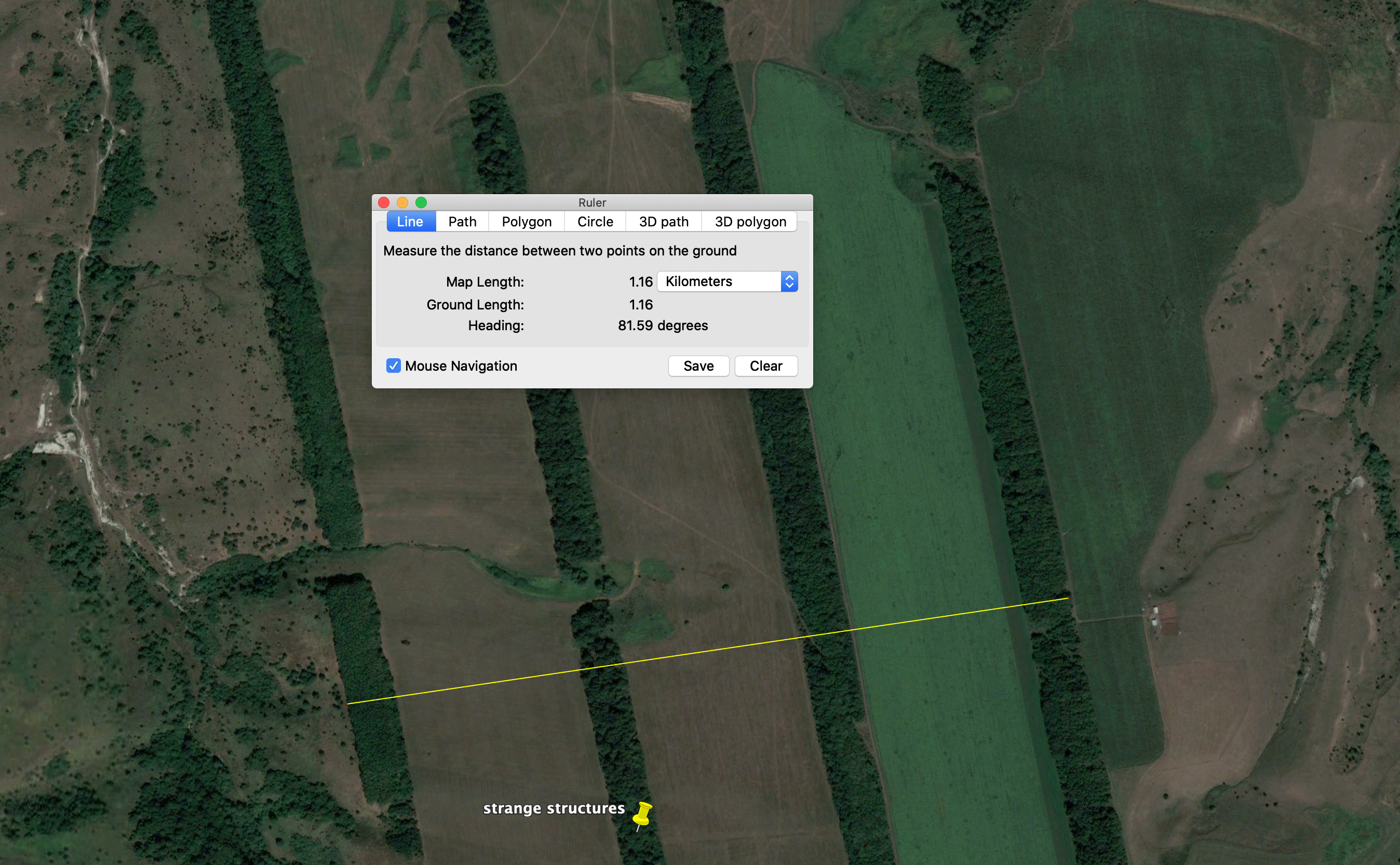 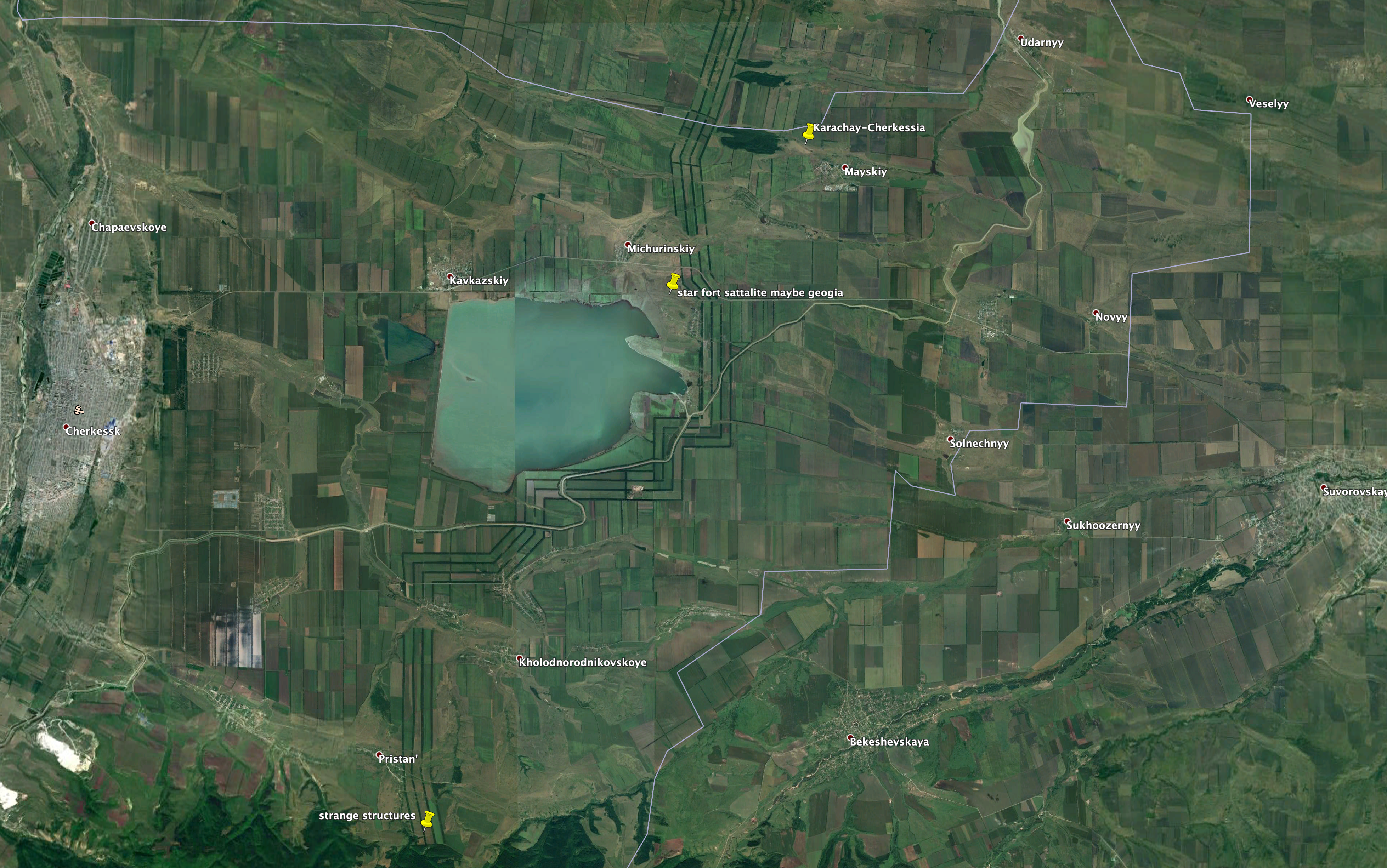 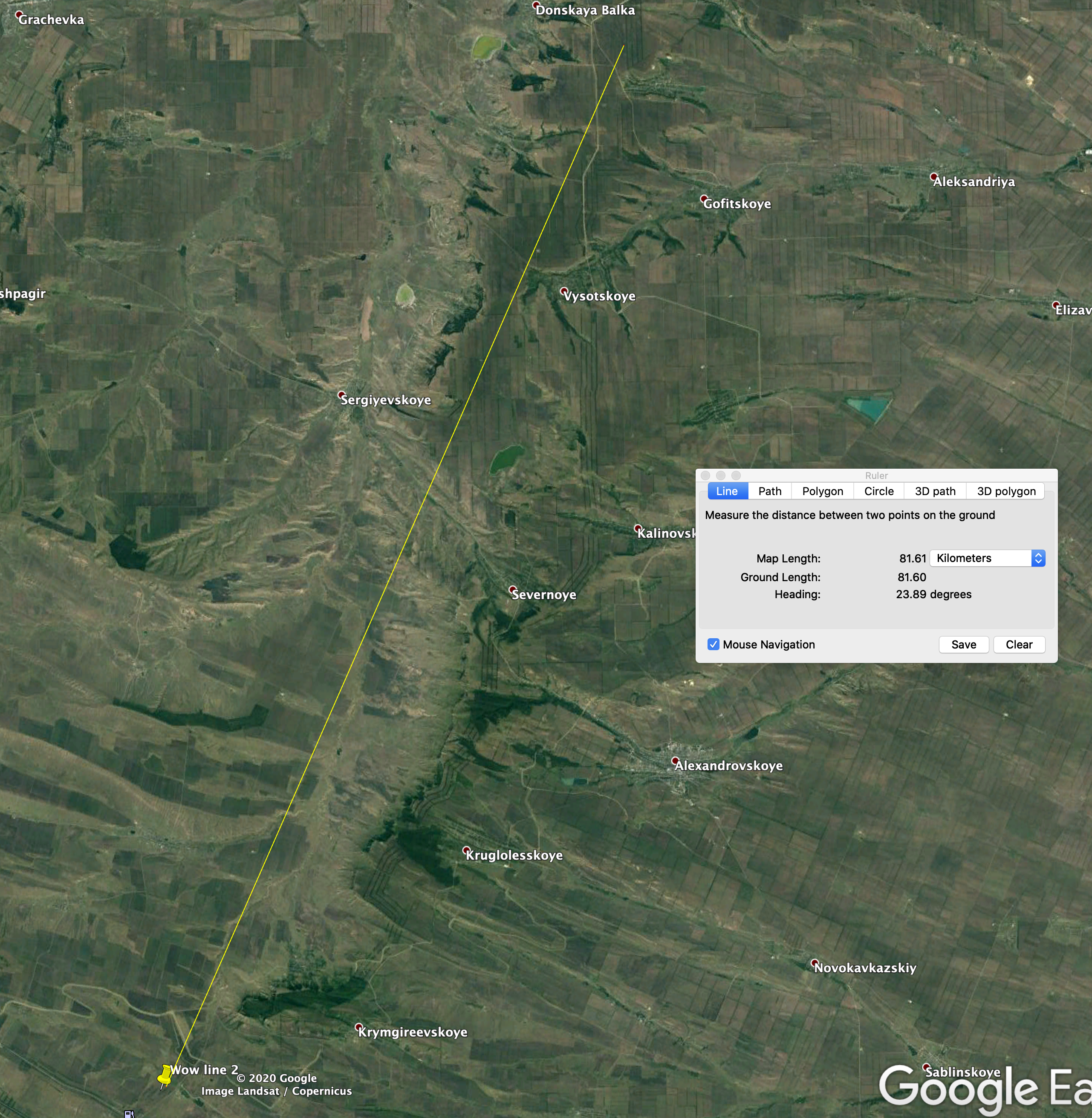 Post automatically merged: Nov 28, 2020
This is the Russian star fort map i have, there are quite a few of these highways on there and many star forts.

There is also this map where starforts and these lines can be seen.

This is how these huge parallel lines look from the ground, in a very interesting section of them
(notice there are many thinner parallel lines to the left and to the right of them) :

Driving next to one of the lines

Leaving the cut, we can see the parallel line, to the right

Another cut with a parallel line

The space between the lines

There is agricultural cultivation between the lines, but not everywhere

It's like Lovecraft's "At the Mountains of Madness" story, with the only difference that you don't need to fly to Antarctica.
Someone took pictures from the An-24 aircraft over Yakutia (Such an old motor slow plane)

Im wondering if the lines with trees are some sort of enhanced earth energy lines. It may explain why the trees only grow within the outlines.
Are they part of an ancient worldwide energy grid? For planetary defense? Multipurpose? I think maybe so.
The trees might be just an aftereffect of the technology, a by-product of the energy manipulation.
This is geomancy on a truly massive scale.

The videos in the OP are the best yet. Well done!
This is one anomaly we can share with friends and family to possibly get them thinking deeply.
Why doesn't mainstream academia cover this topic at all?
The PTB didn't think anyone would ever notice the strange lines and grids. But they were wrong.
Last edited: Nov 30, 2020

JWW427 said:
Im wondering if the lines with trees are some sort of enhanced earth energy lines. It may explain why the trees only grow within the outlines.
Are they part of an ancient worldwide energy grid? For planetary defense? Multipurpose? I think maybe so.
The trees might be just an aftereffect of the technology, a by-product of the energy manipulation.
This is geomancy on a truly massive scale.
Click to expand...

Yes this maybe the case, i also think they could be ancient roads that were built with different minerals(concrete for want of a better word) than the topsoil just like we use tarmac today and over time, because they must have been here enough time for the geology to shift, they have become what we see today, like how different types of moss grow on different rocks, but they just don't seem to lead anywhere although given the time involved where they went may be lost!

Although roads do not make much sense to my 20th century way of thinking as the bends and angles of these road are just to extreme for high speed travel due to, hate to use the word but gravity. 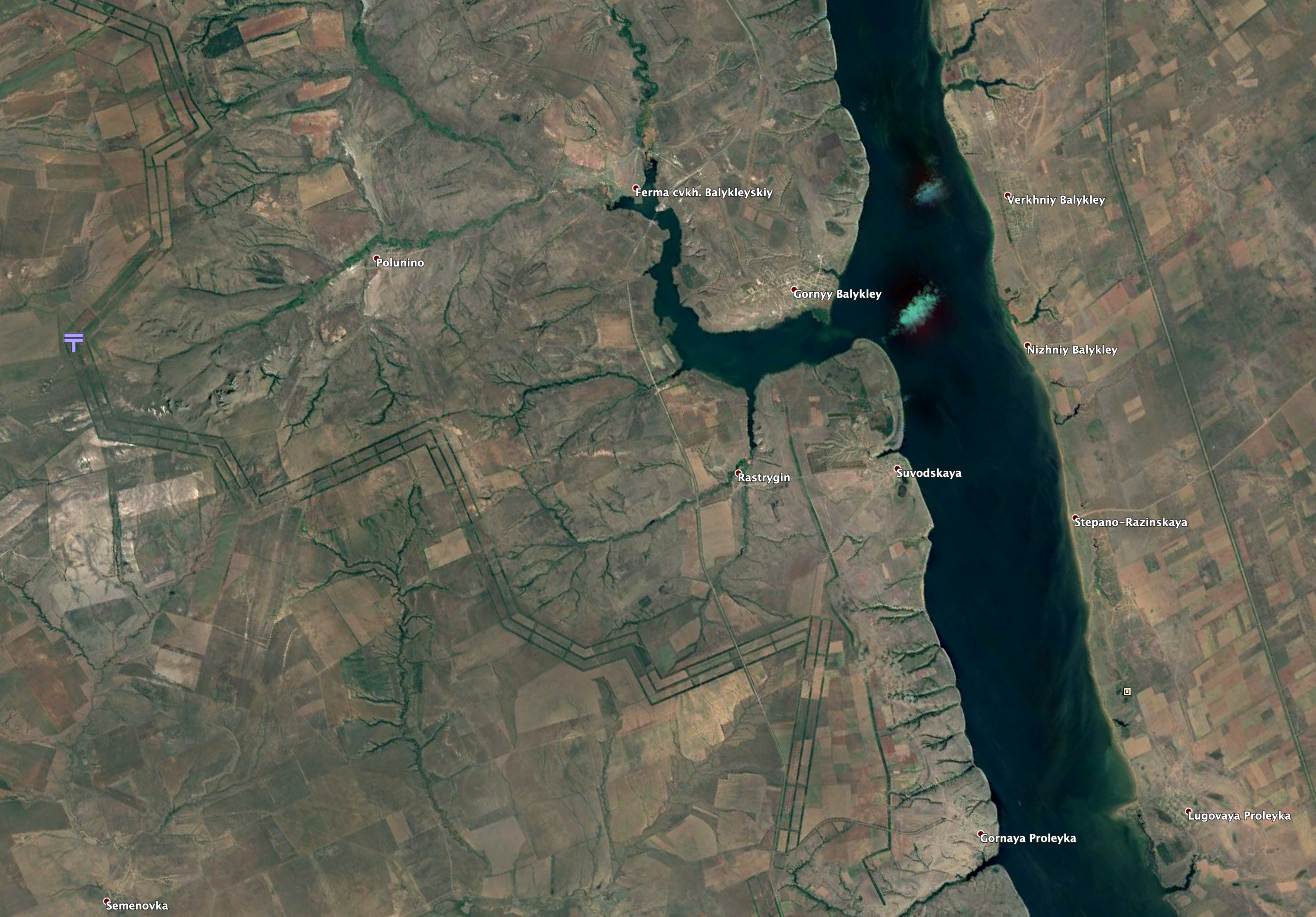 Why would the ancients need parallel line roads? Multiples of them?
Why would they need ones a half mile wide or more on some of them? (Large scale farming/harvesting machine traffic?).
Were the right angle WOW lines above for containing the river in flooding situations?
Were they used for farming and agriculture enhancement via earth energy concentration and Ley Lines?
Large scale energy and water transfer from one region to another?
Were the tree root systems involved with this technology? Aquifers?
Think BIG, folks. I want answers!

JonLevi did a video on this starfort last week, and it got me digging around the area on google earth (apologies I did not capture the coordinates, but they are easily found nearby if you play around with the map yourself.

JWW427 said:
Why would the ancients need parallel line roads? Multiples of them?
Why would they need ones a half mile wide or more on some of them? (Large scale farming/harvesting machine traffic?).
Click to expand...

I don't know if this can be done but overlay the prevailing wind patterns on these line features.
Trees produce rain down wind from where they are planted across the path of the prevailing wind.
This is a proven fact yet gets no 'air time' at all.

Also these tree facts maybe of relevance.
The forest edge is made up of species that can take the brunt of the wind.
A few metres in the physical load of the wind is dropped.
100 metres or so in there is no wind discernible.
Trees regulate the flow of water from sky to sea. Ameliorate it may be a better word.
Dark leaved trees absorb heat and give it off during the night.
Flickering foliage trees like Aspen and Birch reflect light and heat for an area away from them roughly equivalent to their height which creates a milder climate. Crops planted in this area get growing earlier and grow stronger.
Last edited: Nov 30, 2020

3) Mineral Quarry Exploration.
In the 20th century, there seemed to be such a method that if you detonate atomic bombs underground at different points, you can determine the rocks by sound.
The problem is that modern mankind cannot make such quarries, such clearings, soil replacement, huge equipment, etc. Move everyone to the forest (no roads), and start a gigantic construction and exploration there.

KD, I like the tree climate theory...it makes sense if the ancients were going for a certain type of crop harvested en masse.
The right angle turns of the WOW lines is a mystery, but if nature can be manipulated like a circuit board, well...

Trimegistus, do you think at one time in the past the spoke lines around those wells in your photos were for irrigation?

Really no theory involved old man. All it takes to figure this stuff out is to take the time to observe by paying attention to what is actually going on.
It makes no sense if the ancients, whoever they were, were cultivating mono crops or extracting a specific crop from the forest. Monoculture plantations as they are laid out today point to a possibility that we are looking at the remnants of a previous monoculture plantation, though how one could date the thing or place in in a time frame I don't know.

Roads run off 100% of the water that falls onto them so having drainage ditches alongside the road makes good sense in that they allow the water to passively soak into the ground without undermining the road structure. There is no need for the water to be run off anywhere through pipes just give it somewhere to sit and soak and all is well.
Not that many of these lines seem to be about drainage.
Has anyone here actually walked along one or many of these lines?
Are any of them actually on a contour?
K

I looked at the maps of my City, my dacha (I'm afraid the communists gave the land to my grandmother in the cooperative for camouflage ), neighboring regions.
As you know, Soviet maps were a state secret.
It turns out that they were building the city on top of these lines. Explains the problems of their general city plan.
There are also a large number of such lines in the south of the city (where there is especially no life, except for the Granite-Marble Quarries and Villages) Some lines go from there to St. Petersburg, though it is not clear why they need our electricity there (Like a road for dragging stones)

Judging by the Australian Desert Map, there are also plenty of such roads there. Sometimes roads are used as roads, sometimes just near.
Nevertheless, these are apparently the Ancient cities, destroyed by giant escovators at the root

These lines could also be borderlines, with gaps between them to trap and isolate intruders.
You must log in or register to reply here.
Similar threads