The Knights Templar and the Cañon del Rio Lobos 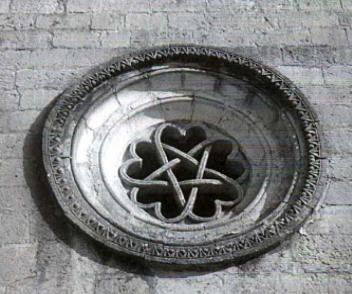 The Cañon del Rio Lobos (Canyon of the River of Wolves) is a natural park located across the border between the Provinces of Burgos and Soria in Spain. That is, roughly halfway between Madrid and Spain’s northern coast. The canyon itself is over 20 kilometres in length and full of caves which have been occupied and used by humans since the earliest times. The canyon is reputed to have been used as the preferred route for merchants and also pilgrims as part of the Camino de Santiago. However, the difficult terrain and the presence of easy and effective ambush facilities for thieves really makes you wonder. 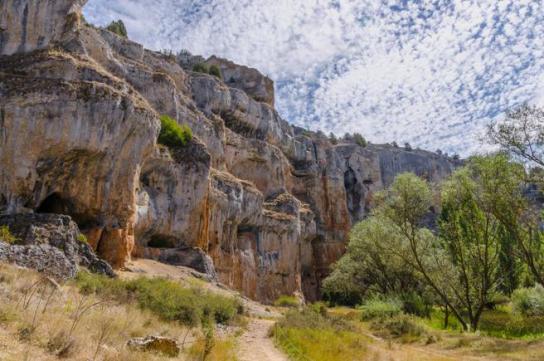 Of course, it is this very consideration that mainstream history claims as the raison d’etre for a Templar ‘church’ located a few kilometres in from the Soria end of the canyon. This ‘church’ is a very mysterious place indeed. It’s officially referred to as the Hermitage of Saint Bartholomew. However, it is by no means certain that this was its original name or that it was even associated with the Templars:

“It is linked to the Order of the Temple, although there is no documentary reference to it other than an incorrect mention by Loperráez that links it with San Juan de Otero Templar monastery located on the hill of San Juan located between the towns of Portelárbol and Portelrubio.” (Article)

It wasn’t until after the Templars had been abolished that it is mentioned as part of their assets which were then passed to the Cathedral of Burgo de Osma. Just as an aside, it was a Bishop of Burgo de Osma who led the Albigensian Crusade against the Gnostic Cathars and wiped them out in 1209. 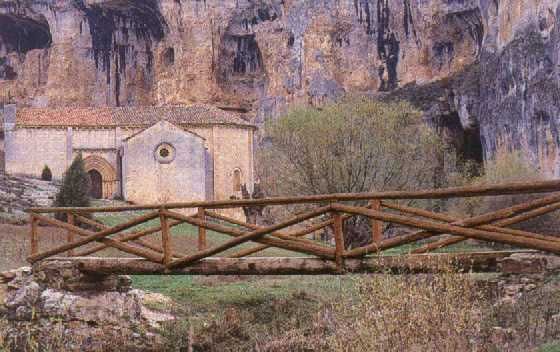 The hermitage sits opposite a huge cave which is across the river. Strange sounds have been reported in the vicinity of the cave and the surrounding area, as witnessed by many visitors.

“Its ritual use in ancient times has been verified. The caves in the rock played a leading role in the cults of various goddesses , such as the Greek Gea (Gaia) or the Phoenician Astarte (Ishtar).” (Article)

Here we have an interesting if circumstantial link between the Greek goddess Gaia and the Gnostic goddess Sophia, who are one and the same. 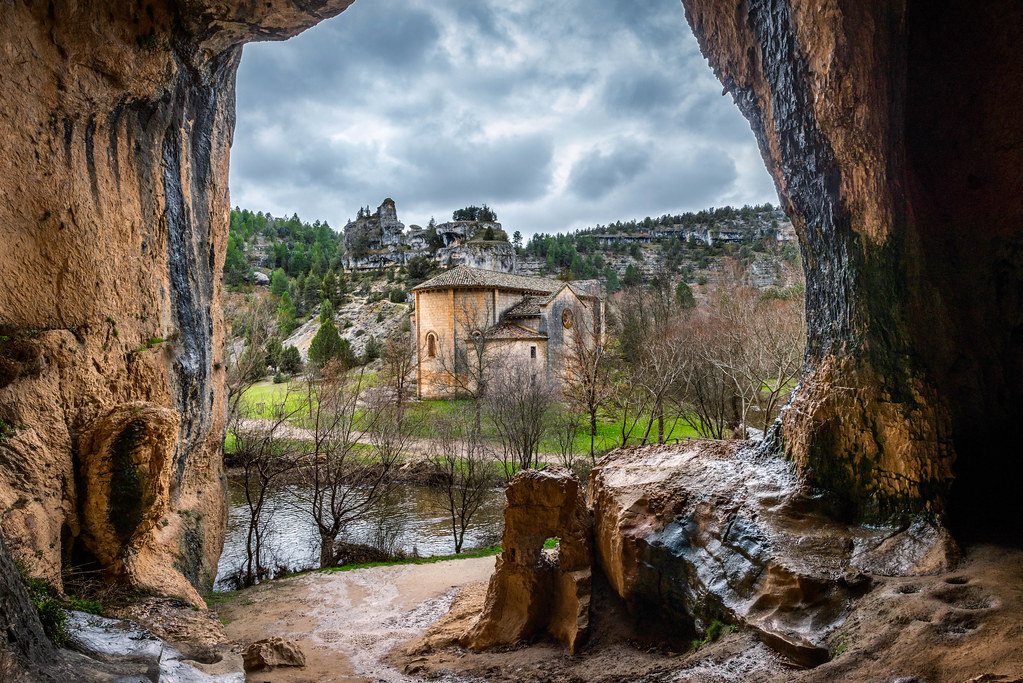 Exactly what that ‘hermitage’ is doing there nobody knows even to this day. There are all manner of theories, of course, but none of them really fit the bill. An awful lot depends on exactly who you think the Templars really were and what their purpose was in the grand scheme of things.

The official story is that they were a monastic/military order of the Catholic Church founded in 1119 which was run along marxist/communist lines whereby no one owned anything and all property went to the ‘State’, sorry, Church. They had to practise social distancing from women along with what became several hundred other ‘rules’ that covered every single aspect of their lives. They protected pilgrims who were prepared to risk life and limb travelling to Jerusalem and they fought against the ‘infidels’ in the Crusades. They are credited with the invention of banking, for which we can’t thank them enough.

By 1312 something had gone terribly wrong and they were officially dissolved. They had accumulated massive wealth in spite of being ‘The Poor Fellow Soldiers of Christ’ and were accused of all manner of pagan devilishness.

There are so many theories and myths and legends and books and films about them that it’s not possible to keep up with them all. There are even those who claim to be modern day versions, not to mention its incorporation into Freemasonry.

To my knowledge there has never been a stolen history perspective on the Knights Templar. By that I mean a theory based upon a different version of what was going on at the time and who the Catholic Church really might have been. These things are fundamental to any explanation of the subject in my opinion.

If we accept that the Old World was under attack and all vestiges of its culture were to be eliminated and that the main player in this mission was the Catholic Church, then a different scenario presents itself. Clearly the arcane knowledge of the Old World culture was the main target of the new regime – it had to be taken out of the public domain, suppressed and controlled. Perhaps also there was an element of discovering exactly what that knowledge was, if we think in terms of architecture and the relationship with elemental forces.

It’s my theory that this was the purpose of the Knights Templar. If there was an Old World version of Freemasonry which held the secrets of sacred geometry, cymatics and proportional harmony then the Templars stole it. If there was a harmonious relationship between man and the supernatural realms then it was the Templars who uncovered its methods and forced it underground. 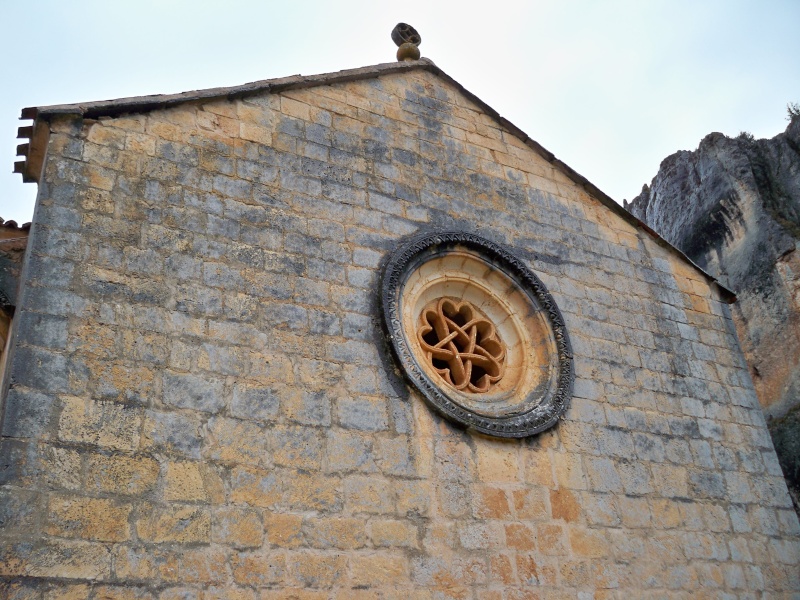 One wonders what the Templars believed this symbol represented.​
This explains the presence of the Hermitage of Saint Bartholomew in the Cañon del Rio Lobos. Either they were studying, manipulating or controlling some kind of supernatural portal linked with the cave. The significance of the difference betwee the names of the hermitage – either Saint Bartholomew or Saint John – is that the feast day of Saint John the Baptist is the same day as the Summer Solstice. Saint John the Baptist was the Templars patron Saint. Saint Peter Canisius, was the similar disguise for the Winter Solstice.

As to the Crusades, well, who’s to say, were they real? It’s my view that the Abramic religions all came from the same source. The Templars may have known this also – it’s more than likely and it fits in with the multiple rumours concerning their secret knowledge. In which case, what was the religious reason for fighting against the Moors? Perhaps the Assassins also knew this as well? There were at least rumours of collaboration. 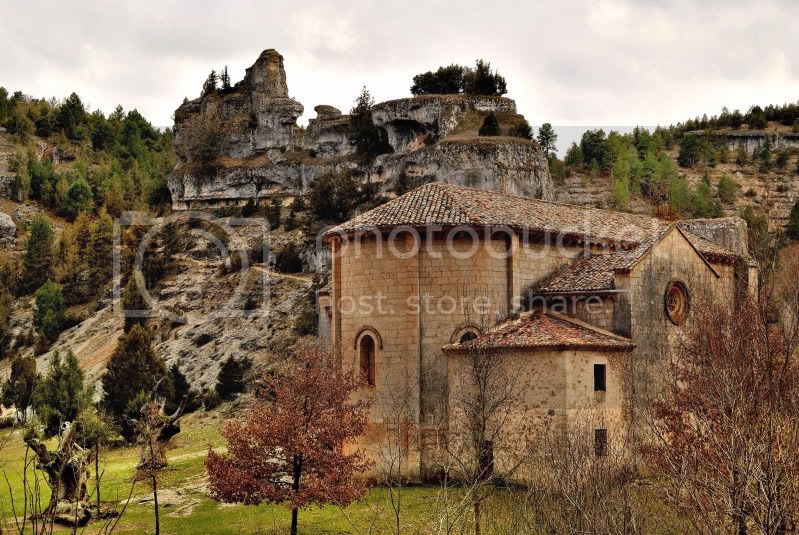 Could it also be that the Templars eventually became ‘infected’ by the knowledge they had gained? Maybe they turned against their lords and masters by using the knowledge they had for themselves? It’s quite clear from the ‘evidence’ that they knew their days were numbered and that they took action to ensure their organisation and its knowledge would carry on after them. In Portugal for example, the King simply absorbed them into the Order of Christ and also created the Knights of Christ. Freemasonry also became a haven for them, although it must be emphasised that this was Antient Freemasonry not Modern Freemasonry which didn’t take over until the Union in 1717. In the UK the order to dissolve the Templars was largely ignored.

If this really happened this way then it must have cost the PTBs a lot of time and effort to finally eradicate their influence and the knowledge they had acquired. To be sure, they have succeeded by now and everything we think we know about the Templars is a lie.

I was a little disappointed that I was unable to find any images from inside the Saint Bartholomew Church or Hermitage, but it doesn’t seem to be open to the public very often, although the situation is rather confusing. I made another attempt and was more successful. In the process I discovered more information about the place which is quite fascinating.

“The very invocation of Saint Bartholomew may give a clue to secret Templar knowledge. It has been said that he knew everything, that he had power over demons and that his death by flaying is reminiscent of a serpent that sheds its skin which in turn represents the change that occurs in the initiate when accessing knowledge.” (Article)

The decoration of the building also shows very clear esoteric references, including initiatory mandalas and the inverted pentagram formed from 5 heart shapes within a protective circle which is said to be of alchemical origin as well as being representative of the grail. Others recall Gemini, the alchemical Labyrinth and the Baphomet among others. (ibid.) There are also various external carvings which include the head of a wolf (which has masonic connections), a barrel and a man with a barrel - known as the alchemical barrel, it represents the initiated teacher, with knowledge of physics and the composition of matter, the letter ‘H’ (Hiram or Hermes), a Templar head with helmet, four heads in the shape of a cross, three Muslim scrolls (?) Source.


“Numerous studies have been carried out that confirm the presence of telluric currents in the environment.” (Article)

“The corbels inside the entrance and the apse stand out, a cryptographic cross of the 8 beatitudes located on a capital inside that is supposed to have a hidden alphabet with which the Templars communicated.” (Article) 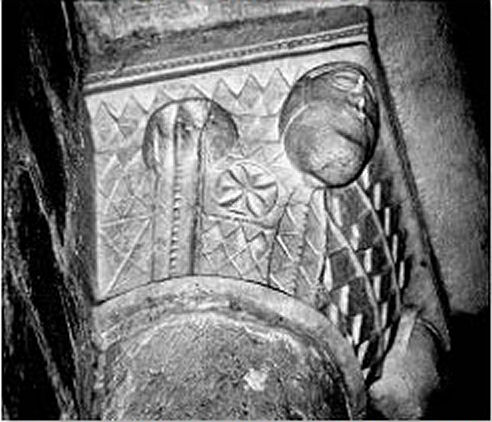 Cryptographic cross of the 8 beatitudes
​
“Ángel Almazán goes further, ensuring that the hermitage of San Bartolomé is one of the "centres of the world", an axis mundi where the upper world communicates with the lower world. Therefore, it would be a true starting place where Man transcends.” (Article)

The edifice at Rio Lobos is not oriented east-west or even north-south. It has been precisely constructed so that on the winter solstice, which coincides with the feast day of Saint Bartholomew as it turns out, the sun shines through the inverted pentagram window directly illuminating a slab placed at the feet of the Virgin of Health and known as the Knights Stone or the Stone of Healing. (From: La alineación astronómica del solsticio de invierno en la iglesia tardorrománica de San Bartolomé de Ucero by Rafael Fuster Ruiz and Jordi Aguadé Torrell) 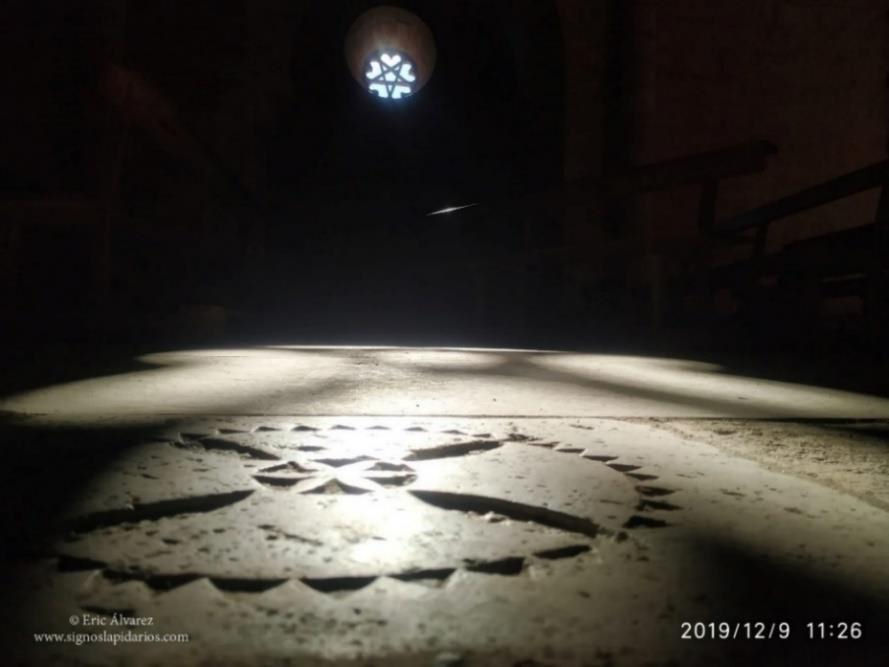 Taken 12 days before the Winter Solstice and the exact alignment
as the researchers were denied access on the Solstice.

Interesting. I don't know anything about the Templars, though.

This is an amazing thread, and it has me longing to know what happens during the solstice when exact alignment is achieved. I’m sure there is ritual involved, hence not being allowed to witness the exact alignment. I think the presence of so many “pagan” symbols and references to alchemy in the various carvings attached to this church gives credence to the thought that the Templars were dabbling in the very type of beliefs and ideas that we were told they crusaded against. Funny how a current revival attempt at revival of the templars are called the Order of Solomons Temple, the construction of which the Freemasons attribute to being their roots. There is so much to think about in the carvings you provided alone. Thank you for putting this thread together.

I keep revisiting this one.
I know so little of this particularity (Spain's more hidden geography and the templars both).
Not only is it niche, and of narrow focus compared to other, broader topics; but the curiousity of location described herein is so unique.

Just stopping by to say thanks for the mystery.

Armouro said:
I keep revisiting this one.
I know so little of this particularity (Spain's more hidden geography and the templars both).
Not only is it niche, and of narrow focus compared to other, broader topics; but the curiousity of location described herein is so unique.

Just stopping by to say thanks for the mystery.
Click to expand...

I have been there a few times - revisiting it in the flesh - and it's truly a magical place. There's no bad feeling at all despite the ominous inverted pentagram symbol (which is formed from interlocked hearts by the way.)
You must log in or register to reply here.
Similar threads